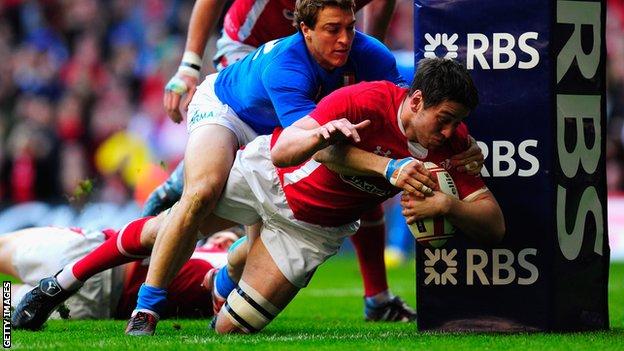 Former Wales captain Ryan Jones hopes his transfer to Bristol at the end of the season will help extend his international career.

Bristol are currently top of the second tier of English rugby.

Jones is back in action for the Ospreys having missed Wales' 2014 Six Nations campaign through injury.

"Hopefully I can use the momentum from this fresh challenge to enable me to continue my international career," said Jones.

Before I move, I want to help the team towards the play-offs and hopefully a fifth league title in 10 years.

The 75 capped back row forward is the third player to sign for the English club, joining Ospreys team-mate Matthew Morgan and Sale scrum-half Dwayne Peel.

Jones, who has captained his country a record 33 times, signed a two-year deal with the English club.

He could even be available to play for Bristol this season if they progress to the two-legged Championship final and Ospreys fail to make the Pro12 play-offs.

The 33-year-old however says he is fully focused on finishing his decade at the Liberty Stadium on a high.

"Before I move, I want to help the team towards the play-offs and hopefully a fifth league title in 10 years," he said.

"This has definitely been the toughest decision I've ever had to make, but it's one that I'm making for my family."

Jones joined the Ospreys from the now defunct Celtic Warriors in 2004.

The Swansea-based side have been the most successful Welsh region during his time with them, winning four league titles and the Anglo-Welsh EDF Energy Cup.

"I've had a fantastic 10 years with the Ospreys and will leave with so many good memories to treasure," said Jones.

"I'm immensely proud of everything we've achieved as a group, with five trophies to look back on and that success has enabled me to enjoy significant success at international level as well. It's truly been a fantastic journey."