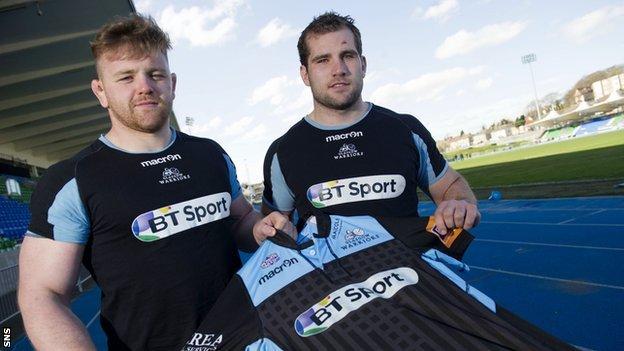 Scottish hookers Kevin Bryce and Fraser Brown have signed new two-year contracts with Glasgow Warriors which tie them to the club until May 2016.

The duo were given after providing injury cover from Heriot's.

Since then, both players have earned Scotland A caps and Brown, 24, has won full international honours.

He was on Scotland's 2013 summer tour to South Africa and then made his debut as a second-half sub against Italy.

"I've really enjoyed my first full season with the Warriors and I'm looking forward to the next two years in Glasgow," said Brown, who played for Scotland A in the draw with England Saxons at Scotstoun in January and has gone on to make 13 Pro 12 appearances for the Warriors.

"I was proud to make my Scotland debut last summer and staying at Glasgow means I can continue to play at the highest level and gives me the best opportunity to play for my country again."

Bryce, 25, has represented Scotland at under-18, under-19, sevens and club international level and also played for Scotland A in the game against England Saxons.

He has regularly featured for Heriot's in the RBS Premiership this season and made his Warriors debut away to the Dragons in Newport last month.

Bryce said: "It was a fantastic experience playing for Scotland A earlier this year and it was good to make my Warriors debut last month.

"This is the best place for me and I'm really happy to be staying at the club to continue my development."

Glasgow Warriors head coach Gregor Townsend said: "It's great news that Fraser and Kevin are staying at the club.

"Both players are eager to learn and they've really developed since joining the club last summer.

"Fraser got an early opportunity to play for Scotland and he clearly benefited from that experience.

"Kevin has been playing regularly in the RBS Premiership this season and has shown a fantastic attitude and work ethic at training. He seized his opportunity last month at the Dragons and impressed on his debut.

"It's important we have a strong squad in order to compete throughout the season and along with Dougie (Hall) and Pat (MacArthur) we have really good competition for the number two jersey."