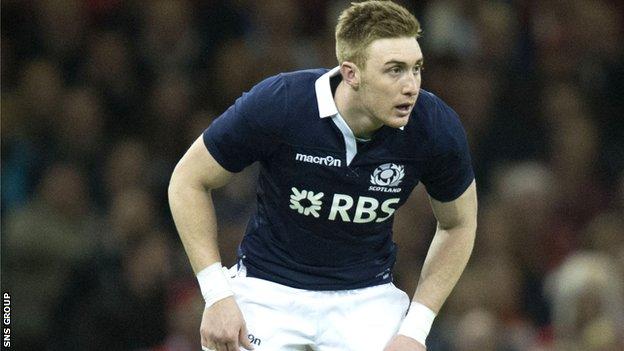 Edinburgh winger Dougie Fife has been ruled out for the remainder of the season following surgery on his hand.

The 23-year-old suffered ligament damage to his thumb during Friday's 9-3 home defeat by Ulster.

Fife, who made his international debut in the recent 51-3 defeat to Wales, is expected to be missing for two months.

Edinburgh have seven games left to play in the Pro12 and occupy eighth spot, although they have two matches in hand over the two sides above them.

"This is really disappointing news for Dougie and the club," said head coach Alan Solomons.

"He has developed and performed well for us this season, which culminated in his first Scotland cap in the Six Nations, so it's a pity that his best season of senior rugby has been brought to a premature end.

"However, as always at times of player injury, it presents others with opportunities to play and promote themselves into contention for regular selection."

Solomons hopes to have Tim Visser back in contention for a place on the wing next month after the club's record try scorer resumed light training following his leg break.