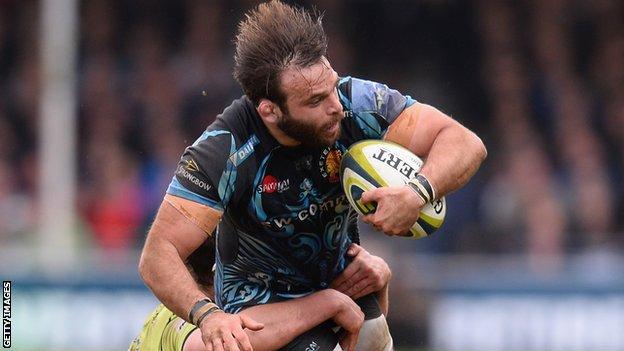 Exeter Chiefs hooker Chris Whitehead has been forced to retire from playing rugby because of a neck problem.

The 27-year-old, who scored a try in his final game for the club in this month's LV= Cup final win, played 76 times in a four-year Chiefs stay.

He joined the club from London Wasps ahead of their first season in the Premiership in 2010.

"It's a huge kick to the stomach and not something I was really planning for," Whitehead said.

"Obviously I'm incredibly disappointed to be told to stop playing.

"That said, I'm proud of my career and what I've achieved and I'm fortunate and honoured to be part of the Chiefs for the past four seasons.

"There is never a nice or an easy time to retire from the game, but to do so early is certainly tough to take."

Whitehead in November 2012, but shortly afterwards

He began his career at Bedford and won England Counties honours with Coventry in 2008 before moving to Wasps the following summer.

"As a player you're always aware that you're not going to last forever, simply because you put your body on the line every week.

"However, I know I'm bowing out on a high having been part of the Exeter side to beat Bath for the first time in years and then obviously going on to beat Northampton and lift the club's first major silverware.

"Those are just a couple of memories that I'll take from my time with the Chiefs, but there are many others that I have as well.

"It's a special club that I've been lucky to be part of for a few years now and the people, the staff and the fans' - all of them have been fantastic with me and my family from the moment I arrived down here."