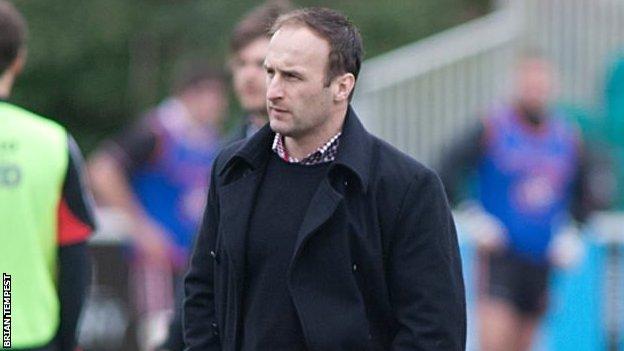 Cornish Pirates director of rugby Ian Davies says Gavin Cattle is the "ideal candidate" to be the club's new coach.

The Welsh scrum-half, 33, will become player-coach at the Mennaye on a two-year contract from the summer.

"During his enforced absence through injury Gav's been doing a bit and you can tell that the players respond very well to him," said Davies.

"When we were looking to bring in a new coach he put his hat in the ring and was the ideal candidate."

Cattle replaces Harvey Biljon, who left the Pirates to

He is in his second spell at the Pirates, having rejoined the club from Llanelli in 2009 after two years away from the Mennaye.

"We've seen a few shoots of development already, although it's early days, but I'm sure with a good pre-season going into next year we'll see further development," Davies told BBC Radio Cornwall.

"It's difficult sometimes, the player-coach role can be a difficult one, especially with your peers, but he's mature enough and he has the respect of everybody to be able to carry that off.

"Hopefully we'll see him on the field a bit more next year than we have this year, but that coaching role is an important one," he added.