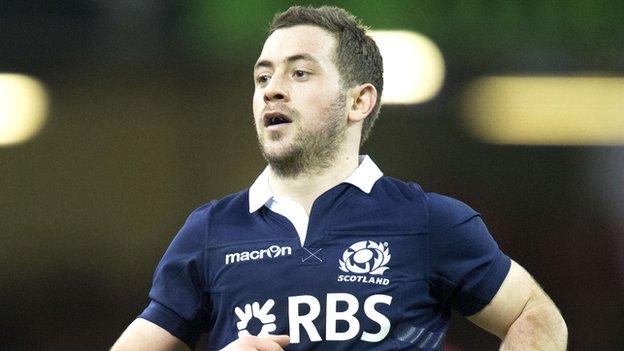 The Pro12 club say they agreed with Scottish Rugby to rest the scrum-half, who will join Gloucester next season.

Edinburgh head coach Alan Solomons said: "We are happy to support him and Scottish Rugby in this regard.

"The performance of the national team is of the utmost importance to the whole of Scottish rugby."

Edinburgh, who lost 9-3 at home to Ulster on Friday, are no longer in the running to finish in the top four in the Pro12 and qualify for the end-of-season play-offs.

We have very capable, young Scottish scrum-halves who will compete for the number nine shirt next season

Solomons said he agreed to the governing body's request as it would be "a big year" for a "long-standing servant" of the club.

Laidlaw played all five of Scotland's Six Nations games and stood in as captain while selection decisions and injury kept forward Kelly Brown out the team.

The scrum-half's absence means Scotland A caps Grayson Hart and Sean Kennedy, plus 20-year-old Sam Hidalgo-Clyne, will have a chance to prove themselves as long-term successors to the Scotland international.

"We have very capable, young Scottish scrum-halves who will compete for the number nine shirt next season and will continue to get the opportunities they have handled admirably in Greig's absence during the Six Nations," said Solomons.

Edinburgh this month allowed Geoff Cross to join Glasgow Warriors on loan shortly before it was announced that the Scotland prop was to join London Irish in the summer.

The national body said the break for Laidlaw was designed to rest a vital player ahead of Scotland's four-Test summer tour.

Scott Johnson, Scotland's director of rugby, said: "Greig has played a lot of rugby for both Edinburgh and Scotland this season and he's been a key figure in our leadership group.

"His time at Edinburgh has meant a great deal to him and he will have the opportunity to play again for Edinburgh this season.

"With the schedule as it stands, looking ahead over the next 16 to 18 months, we're grateful to Edinburgh for supporting this move."