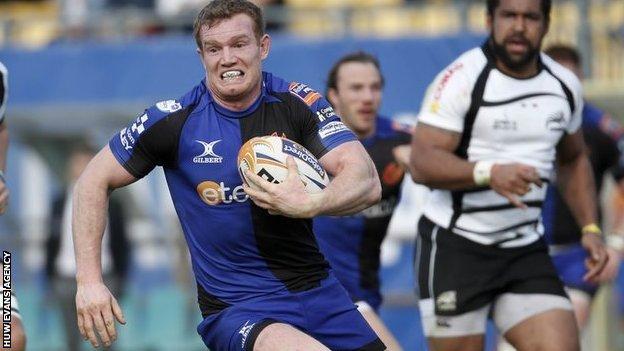 The Italian side took the lead through Samuela Vunisa's early try while Taulepe Faletau was in the sin-bin.

Dragons coach Lyn Jones had called for his side to offer a response to last weekend's 24-8 home defeat by Connacht that delivered a big blow to their top-flight European hopes for 2014-15.

In scoring three tries to Zebre's one, the visitors provided the evidence of the character that Jones wanted to see.

But Zebre, looking for the first two successive wins of their fledgling existence, also underlined their battling qualities.

Fly-half Orquera converted and remained a kicking threat throughout as Zebre capitalised on Dragons' indiscipline under pressure.

But the visitors had the edge with ball in hand with full-back Evans going over.

After centre Garcia's long-range penalty, centre Smith was put over and fly-half Tovey converted before he and Orquera exchanged penalties.

Orquera added for more shots at goal to Tovey's single successful second-half penalty as the hosts largely dominated after the break.

But Zebre could not break the visitors' full-strength defence and remained vulnerable.

Dragons earned their reward when Groves picked up at a ruck and burst clear.

Tovey levelled with the angled conversion.