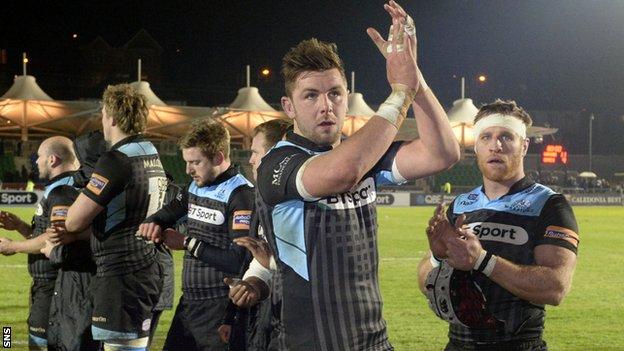 Glasgow Warriors edged out Ospreys after a dramatic finale to narrow the gap between the sides to a point in the battle to earn a Pro12 play-off place.

Ospreys' Dan Biggar kicked the only points of a first half that the Welsh side dominated in terms of territory.

Two Duncan Weir penalties edged Glasgow in front, but Biggar put Ospreys ahead again with a penalty and drop goal.

Tommy Seymour touched down from a kick on by Niko Matawalu, who then charged down a late Biggar drop-goal attempt.

Matawalu charged up the other end and, although he was beaten to the touch behind the Ospreys posts, it forced referee John Lacey to blow the final whistle.

It is now advantage Glasgow in the race for fourth spot and a place in the Pro12 play-offs, with the fifth-place Scots now having two games in hand over the Ospreys.

The Welsh side, who went into the match four points ahead, were forced into a change after only 16 seconds when hooker Scott Baldwin suffered a head knock straight from kick-off and had to be replaced with Scott Otten.

The visitors were not thrown out of their stride, though. Baldwin managed to return to the action and, with the help of a strong wind at their backs, Ospreys camped inside the Glasgow half.

Amid the pressure, Warriors lost their own hooker, Pat McArthur - who had come into the side along with Finn Russell and Leone Nakarawa - to injury, with Dougie Hall winning back his place after only 11 minutes.

Handling errors plagued the hosts each time they threatened to break out of their own half in a match billed by their head coach, Gregor Townsend, as their most important of the season.

Despite their domination of territory, Ospreys failed to threaten the Glasgow try line. However, they did manage to edge in front when Biggar slotted a penalty after 18 minutes.

Glasgow's nervousness even afflicted the normally sticky fingers of Matawalu, who made several simple handling errors before an untidy first half drew to a close.

While some the play remaining shambolic after the break, an increased in tempo by the Warriors led to a penalty that was clipped over from close range by Weir.

The stand-off had to produce an impressive diving interception almost immediately after to thwart a superb break and grubber kick from Biggar as Ospreys responded.

However, when the Welsh conceded another penalty, Weir used the wind to fire his kick between the posts from all of 40 yards.

Biggar soon levelled the game again, though, when Weir was caught offside after the Welsh side at last exerted a period of pressure only to be held up five yards from the Glasgow line.

Ospreys were growing in confidence and a break from their own half made the space for Biggar to fire a successful drop goal and give the visitors the lead.

It looked like time was running out of time before Matawalu, now looking more comfortable in his more natural scrum-half role, made a superb break and Seymour won the chase to touch the ball down.

Russell looked to have settled the game when he touched down in only his fourth start for Glasgow only to have the try ruled out for an earlier knock on.

Ospreys were not beaten yet and wave after wave of attack looked to have set up Biggar for another, this time winning, drop goal, but Matawalu made a game-settling interception to save the day for the home side.