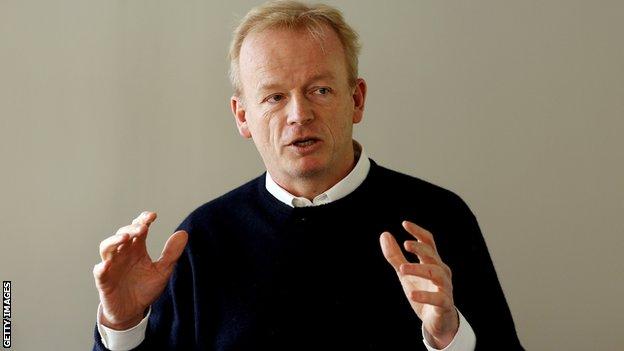 Saracens chief Edward Griffiths has accused the Welsh Rugby Union of being "erratic" during negotiations over a new European club tournament.

An announcement of a new competition to replace the Heineken Cup is expected soon, bringing an end to a long and at times bitter row over its future.

Griffiths praised the Welsh regions, but not the WRU.

"I think some of the Welsh Rugby Union's behaviour has been erratic and unpredictable," Griffiths said.

"Maybe they've come round to see a little bit of sense."

The new European Cup will be run by a company based in Switzerland, as opposed to the current organisers, Dublin-based European Rugby Cup (ERC), which is likely to be wound-up.

It will involve teams from all the Six Nations countries and run alongside a challenge cup and a developmental tournament.

The main cup competition will involve 20 teams rather than the current 24, with six qualifying from the English Premiership, six from the French Top 14 and seven from the Pro12.

At least one team from each of the Pro12 countries - Scotland, Wales, Ireland and Italy - will be guaranteed a place in the tournament.

The remaining spot will go to the winner of a play-off between the seventh-placed teams in England and France.

Broadcast rights for the new tournament are expected to be shared between Sky and BT.

Mr Griffiths did not participate personally in the peace talks, the Aviva clubs were represented by Premiership Rugby, but he said: "I think everybody should be happy."

"The Welsh regions have been clear and been clear-minded in the whole process and deserve a lot of credit for sticking to their guns.

"We've got a competition with a fairer format and with a fairer financial distribution, and in fact there's no reason why this format won't actually generate more money for everyone.

"So it is truly a win, win, win competition and I think once the egos got out of the way it was fairly easy to find a solution.

"At the end of the day it's our responsibility as rugby administrators is to put the best possible competition on the table for the coaches and players to play in and the supporters to watch."

The WRU has been asked for its response to the comments from Griffiths.