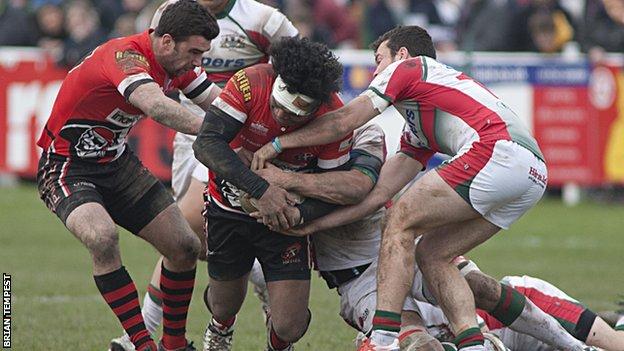 The victory extended the Pirates' winning streak over rivals Albion to nine league matches going back to 2009.

But Plymouth boss James Shanahan was unhappy with the officials.

"We got over the line twice, put the ball down twice, and one was disallowed by the referee and the second was unsighted by all three officials," he told BBC Radio Devon.

"I saw them both pretty clearly, as clear as they would see them, and for me it's two tries. If you get those tries it's a different ball game.

"But we still made too many errors and our scrum wasn't good enough."

Max Bodily and Tom Riley crossed in close succession for Pirates and former Albion fly-half Hallett added one conversion to put them 18-7 ahead.

But Albion's Eoghan Grace scored just before half-time to reduce the arrears to 18-14.

Two Declan Cusack penalties and one for Hallett saw the scores move to 21-20 before Tom Kessell scored a try late on for Pirates to seal their win.

"It was a derby match to be proud of," Davies told BBC Radio Cornwall.

"I thought we scored a couple of cracking tries in the first half and really took the game to Plymouth to dampened their enthusiasm.

"Kieran Hallett was fantastic, managed us really well in the first half and was probably the key contributor to the victory."

The win lifts sixth-placed Pirates 12 points clear of Albion, who are eighth in the Championship table.