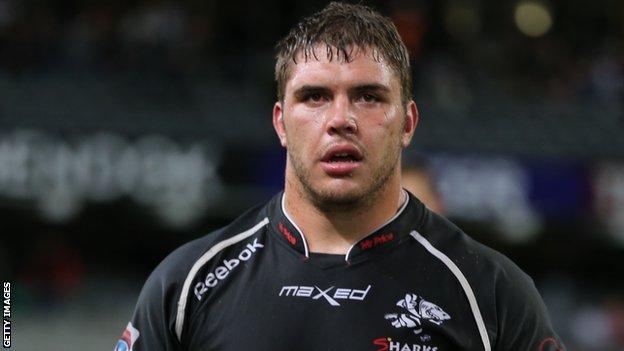 Ulster have been seeking a tighthead since John Afoa's decision to quit the club at the end of this season.

Herbst was part of the South Africa squad at the World Under-19 Championship in Ireland in 2007.

The 25-year-old, who has played 37 Super Rugby games since making his debut in 2009/10, has signed a three-year contract with the Irish province.

Herbst also represented South Africa at the Junior World Championships in Wales in 2008.

"Ulster Rugby is a province on the up and, for me, it was just a great opportunity to develop my career and to take it to the next level," said Herbst.

"The team is doing extremely well at the moment and with the stadium being redeveloped there is a great set-up at Ravenhill. It will be exciting to be part of."

Ulster's Director of Rugby David Humphreys described Herbst as a "highly talented young player with a proven track-record in a specialist position".

"I have no doubt that he will be a huge success and that he will follow in the footsteps of the other overseas players that have come to Ravenhill in making a major contribution," added the Ulster chief.

Herbst is understood to have been signed with a view to him becoming a project player who would become eligible to represent Ireland within a three-year period.

Ulster have already signed Irish-born Ruaidhri Murphy from Australian side Brumbies as a replacement for Tom Court, who will move to London Irish after this season.