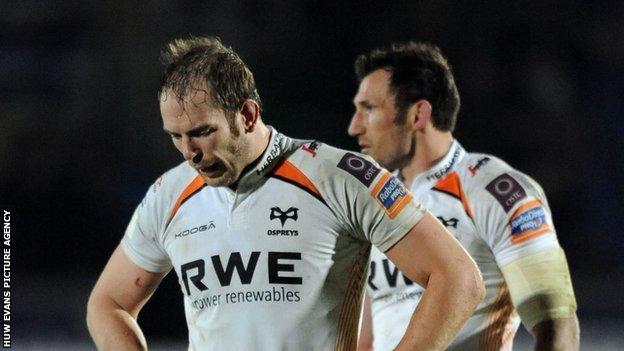 Ospreys' nail-biting 11-9 defeat to Pro12 rivals Glasgow was a "massive blow" according to Dan Biggar.

The fly-half saw a last-minute drop goal attempt charged down to deny the Welsh region a vital Pro12 win.

Biggar edged Ospreys 9-6 ahead with a 72nd minute drop goal, before a moment of brilliance by Niko Matawalu created a winning try for Tommy Seymour.

"It's a massive blow. The boys put so much effort in and the spirit we showed was unbelievable," said Biggar.

"But at the end of the day it's a defeat and it's probably going to cost us."

The result cut fourth-placed Ospreys' lead over fifth-placed Glasgow to a point, with the Scottish team having played two fewer games.

But Biggar, who kicked all Ospreys' points in a bruising encounter at Scotstoun, believes his team can still claim a play-off place at the end of the season.

"I'm just so disappointed, we edged ourselves in front with six minutes to go with a droppy [drop-goal] and then we just conceded to a bit of brilliance by Matawalu," he said.

"But they've still got some tough fixtures to come.

"We've got a couple of home games and a decent run-in, so we've got to keep believing until the end - but it's hugely disappointing.

"We won't give up until it's mathematically over, we'll keep fighting until the end."