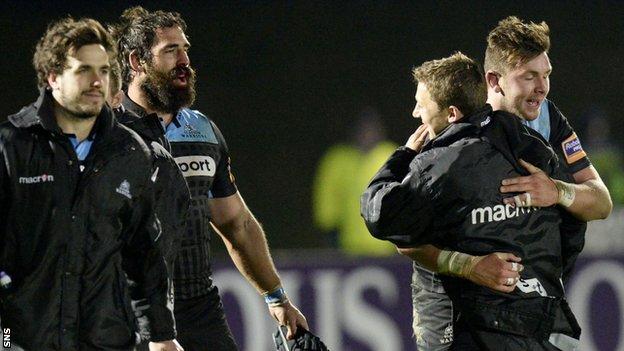 Character and belief earned Glasgow Warriors to a vital 11-9 Pro12 victory over Ospreys at Scotstoun, according to head coach Gregor Townsend.

Glasgow are only a point behind the Welsh side with two games in hand as they chase a play-off spot.

"I thought defensively we had a few missed tackles tonight that we've not seen for a while," said Townsend.

"But the important thing is the character the team showed to keep our line intact and a belief we can win."

Tommy Seymour's try after a Niko Matawalu kick ahead put Glasgow in front with minutes to play.

But Ospreys' Dan Biggar had a drop goal that would have won the game for the visitors in the dying seconds charged down by Matawalu.

"Relief is one emotion," said Townsend. "I am full of joy at seeing the team doing so well in difficult circumstances when you go behind against such a good team with a few minutes to go.

The momentum is there, we know we can play much better and we've got more to bring out

"They fought for that win and showed real belief to get that win.

"It was a great finish and when you get a break like that, it is a great bit of skill by Niko to put the kick in, but you need someone to go and finish it and Tommy did very well."

Nerves appeared to get the better of both teams as the handling errors mounted in a game that Townsend had billed as his side's most important of the season.

"We weren't too pleased with the first-half performance," he said. "I think we really struggled with the ball in the wind and they dominated possession.

"It was much better in the second half and it looked like we were getting past the advantage line but just not finishing things off."

Townsend was optimistic about his side's chances of overtaking the Ospreys and clinching a top-four place.

"It will be a challenge," he stressed. "Treviso are a much better team when they've got their Italian internationals back - they pushed Munster close last week.

"We have Edinburgh in the 1872 Cup to play, we have Munster and Ulster to play, huge games ahead of us.

"The momentum is there, we know we can play much better and we've got more to bring out."