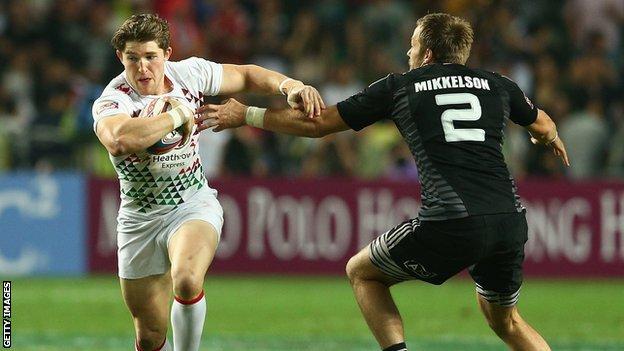 England were beaten 26-7 by a rampant New Zealand in pouring rain in the final of the Hong Kong Sevens.

New Zealand outscored their opponents by four tries to one and celebrated by stripping to their chests and performing the Haka in the downpour.

The All Blacks led 12-7 at half-time and added a further 14 points despite having Ben Lam sin-binned.

Wales lost 19-14 to South Africa in the Plate final, while Scotland beat France 31-5 in the Bowl final.

England reached the final with a 17-7 victory over Fiji in the semi-final but were always second best against New Zealand.

The All Blacks pounced on seven first-half errors by England to open a decisive half-time lead with Lam and Tim Mikkelson going over before Tom Powell replied for England with a converted try.

DJ Forbes and Sam Dickson underlined the All Blacks' dominance with further tries in the second half as England tired.

England were denied a consolation try in the last minute when Marcus Watson ran 80 yards to the line, but it was ruled out for a forward pass.

New Zealand's win means they have regained top spot in the Sevens World Series standings from second-placed South Africa, with Fiji third and England fourth. The series heads to Glasgow next for the Scottish Sevens on 3-4 May.