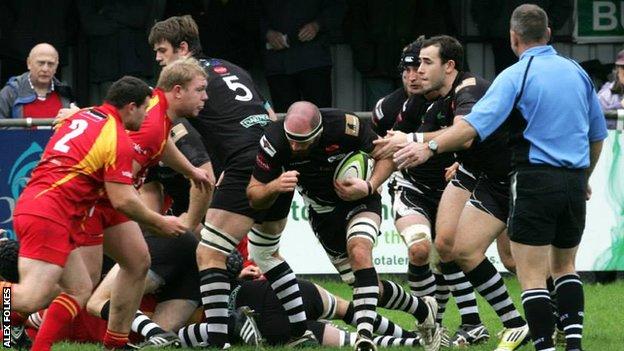 Launceston coach Tom Rawlings says their 25-21 loss at Bournemouth was hard to take as they dropped into the National Two South relegation places.

The Cornish All Blacks had a 14-point lead just before half-time before the home side scored 18 unanswered points.

"You've got to finish games like that and we didn't. We're very down after the loss," Rawlings told BBC Cornwall.

"There's only so many times you can go back to the drawing board because it's little marginal errors."

Tries from James Salter, Richard Friend and Kyle Speare put Launceston 21-7 ahead with just over 10 minutes to go in the first half before Bournemouth struck back.

Rawlings says the defeat was even more galling after their

"We felt we'd turned the corner last week," he said. "We went in at half-time three tries up, played all the rugby and looked very much in a position to win the fixture.

"But second half they came out with want and fire in their belly and we didn't really get the roll of the dice.

"This was a must-win for us and we didn't get that - it's a very hard camp at the moment and the boys are down."

The defeat for the Cornish All Blacks, coupled with Dings Crusaders' 43-10 win over Clifton, sees Launceston go behind Dings by a point, although they do have a game in hand.