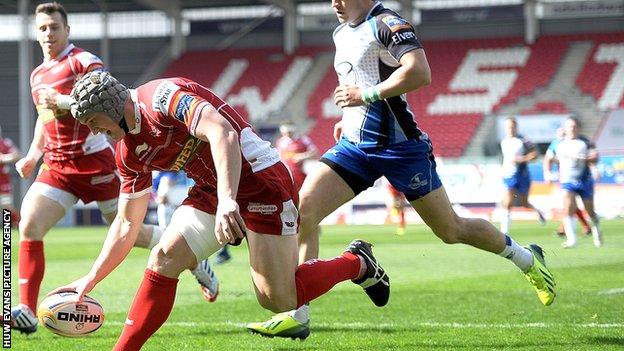 Scarlets head coach Simon Easterby says European qualification is in their own hands following their victory over Connacht on Sunday.

The Scarlets were without 15 players for the fixture, which they won 32-30.

The victory leaves the Welsh region sixth in the Pro12 table and in contention for a qualification place for Europe if plans for a new tournament are ratified.

"It's still very much in our own hands," said Easterby.

The Scarlets will know that if they take maximum points from their remaining games they will guarantee European qualification under the current proposals, although a decision on a new tournament has yet to be made.

Easterby believes the Scarlets need to build on the manner of the win over the Irish province.

"I think if we play similarly to what we did with ball in hand against Connacht then we'll be difficult to beat towards the end of the season," said Easterby.

"That's the good thing about this competition moving forward, if top six is what we [need] to get into Europe it makes these games all the more interesting for everyone including ourselves.

"We missed out on a top four spot because of our early season form and losing games we should have won.

"The most important thing now is that we finish strongly; we have to get as many points in the bag as we can and finish as high as we can."

Hooker Ken Owens, who played 57 minutes against Connacht before being replaced by Emyr Phillips, also stressed the importance of European qualification for the Scarlets.

"We set the target of top six now that we can't get to four," said Owens.

"There's everything on every game. I think it makes for a better spectacle and it's a lot better for the league."