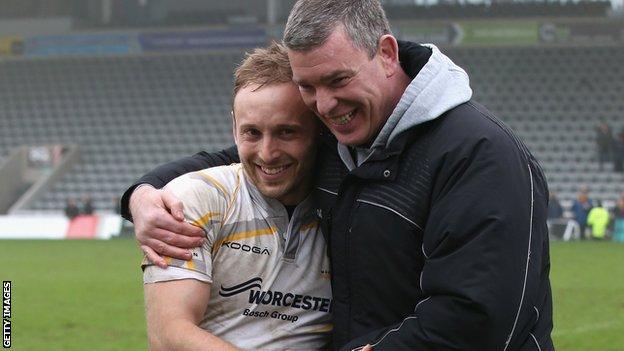 The 17-12 triumph ended a 22-game league losing run, and moves them to within nine points of Newcastle, who have lost their last 12 league matches.

"We know we have to pull off a miracle match somewhere, but you never know."

Worcester still need at least two wins from their remaining four games, which includes trips to Saracens and Bath, to secure their top-flight status.

"We are pleased that we have got something in the end - something tangible," said Ryan.

"It came off the back of a good team performance, if not a good performance if that makes sense, because that is probably the worst we have played for a while.

"It would have been a pretty crappy season if we'd just stumbled through [without a win]. This group don't want to do that - they want to fight.

"We've been tight now for two or three months, and we need to be again because that was a pretty ugly game.

"We're not pretending we're suddenly a top-six side or any rubbish like that, but we've become a pretty strong group and that's the first place to start for us to move forward."

Worcester's 22 successive Premiership defeats (five at the back end of last season, 17 in the current campaign) is the second-worst run of results in Premiership history.

The record is the 30 straight defeats run up by Rotherham Titans, which began in February 2001 and stretched all the way through the 2003-04 season - and remains unbroken, should they win promotion in May.

Ryan praised centre Andy Symons for coming up with the decisive moment which ended their winless drought - dating back to 1 March last year - bursting free to put winger Josh Drauniniu through for the only try of the game at Kingston Park.

"Andy Symons has threatened that two or three times, and we haven't seen enough of him," said Ryan

"I've always been keen on getting [fly-half Ryan] Lamb with him, to see if we could open things up, but it's difficult in a game like this, because there is a lot pressure around and fear or making an error."

Ryan paid tribute to Warriors fans for their ongoing support in trying times for the club.

"The guys are really aware and thankful of the support we get."