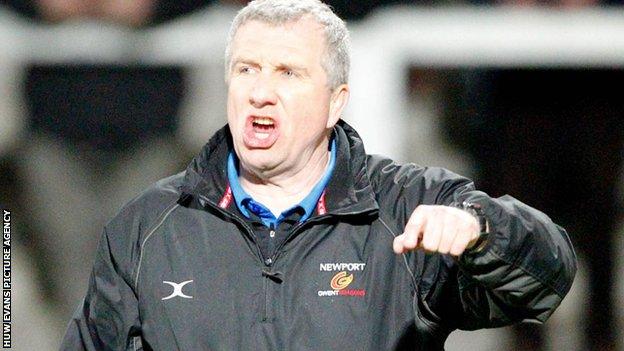 An application has been lodged with the Welsh Rugby Union to allow such signings to be made for next season.

The four Welsh regions must clear any overseas signings with the WRU first.

"If the standards are moving up we have to bring in ready-made, quality players to help the development of younger Welsh players," Jones said.

"We have an application in... but obviously we don't want to say anything until after the hearing.

"We're no different to the other three regions, we have an application in with the governing body for approval.

"The employment laws in the Republic of Ireland and France are completely different to what they are in Wales; the choices for those teams are a lot greater.

"You only have to look at Edinburgh to count the Scots guys on one hand."

Dragons face Edinburgh on Thursday night in the Pro12 on the back of a lacklustre 8-24 loss at home to Connacht and last weekend's 25-25 draw away to Zebre.

Jones admits those two results have realistically left Dragons out of the running for European Cup competition for next season.

The expectation is that Dragons would need to finish in the top six of the Pro12 to play in the top-tier European competition next season, but they currently sit eighth and are 11 points behind Scarlets.

"I can look at the league and say this and that, and for every team you want to be qualifying into the European half and we're not going to do that," Jones added.

"We're not good enough this season to do that, so we need to keep focusing on improving our game, improving our performances and our abilities."