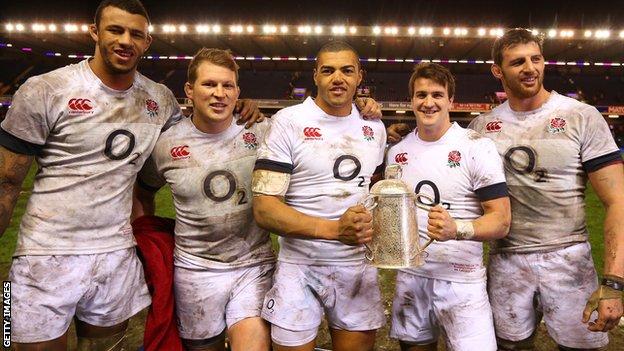 Northampton scrum-half Lee Dickson insists their England players have not found it difficult to readjust to club rugby following the Six Nations.

Saints have lost both Premiership games since the return of Dickson and five international team-mates after winning the previous 11 in the competition.

"It shouldn't be hard and I don't think it is hard for us.

"But we have to look forward, not backwards."

Saints before and after

The six were in the starting line-up for Northampton's first post-Six Nations Premiership game, which they lost at Sale, and all but Dickson started in last week's defeat by Leicester.

The double setback has seen Jim Mallinder's men deposed at the top of the table by Saracens.

"People are expecting big things from you and that's the beauty of this club - the coaches have made a work ethic where you're not guaranteed a spot in this team," said Dickson.

Northampton side face Sale again on Thursday night, this time in an Amlin Challenge Cup quarter-final at the AJ Bell Stadium, and Dickson is confident they will bounce back strongly.

"There's more to come. You've seen how we've put people to the sword," he added.

"When things click we're unstoppable. We want to be going into this game, getting a big win and getting the ball rolling leading into the business end of the season and putting a marker down for the Premiership."