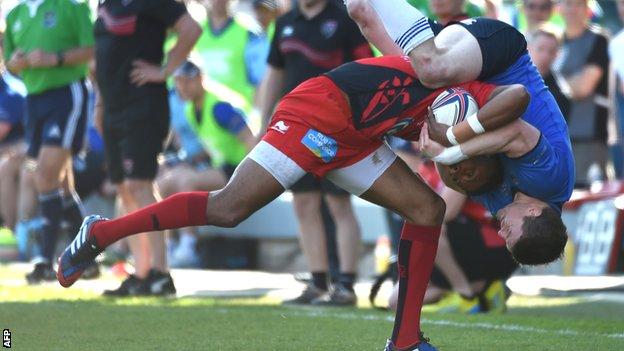 Jonny Wilkinson kicked two early penalties for Toulon but then went off injured and two Jimmy Gopperth replies made it 6-6 at half-time in France.

O'Driscoll, 35, will retire at the end of the season and had been hoping to add the Heineken Cup to the Six Nations title he won with Ireland earlier this season.

But cashed-up Toulon's assortment of stars from around the world - with England's Armitage brothers and South Africa forward Danie Rossouw prominent - had too much power and class for three-time champions Leinster and will now play the Irish side's close rivals Munster in the last four.

The win means former England fly-half Wilkinson, who is also expected to retire at the end of the season, should have at least one more game to play in Europe's top club competition - provided the 34-year-old recovers from injury in time for the semi-finals in three weeks.

Toulon started the match with the ferocity demanded by their pre-match Pilou Pilou war cry and, with the giant Mathieu Bastareaud prominent, soon had Leinster rocking.

However, a combination of desperate defence and Toulon errors prevented the hosts from crossing the visitors' try-line and it was the trusty boot of Wilkinson, the tournament's leading points scorer this season, that got the scoreboard ticking over.

Leinster survived the initial assault and created enough pressure for Gopperth to get them on the board, but the way the hosts ended the half with wave after wave of attacks meant it was still a minor miracle the match was level at 6-6 at half-time.

Wilkinson had gone off with what appeared to be a hamstring injury after 27 minutes, with former Australia back Matt Giteau taking over kicking duties, and within a couple of minutes of the restart he nudged the hosts into a lead they would not relinquish.

They finally cut out the errors as they made a spectacular start to the second half and soon after Giteau's penalty Toulon, sparked by a midfield break by their excellent hooker Craig Burden, battered their way over through loose-head prop Xavier Chiocci.

Giteau converted and although Gopperth trimmed the gap with his third penalty, when a line-out went wrong for the visitors Toulon pounced, with former Wallaby wing Mitchell stepping his way over after lively number eight Steffon Armitage, the man of the match, had kicked ahead and almost scored himself.

Giteau again converted and Delon Armitage then boomed over a massive penalty to give the hosts a match-winning lead.

Leinster gave themselves a glimmer of hope as replacement flanker Murphy went over at the back of a driving maul as the game entered the final 10 minutes, but a further Giteau penalty prevented any late alarms for the defending champions.