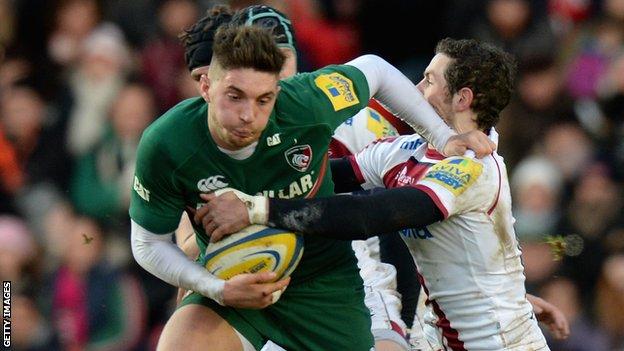 Owen Williams should be picked by Wales for the summer tour to South Africa, according to Leicester director of rugby Richard Cockerill.

The uncapped 22-year-old has been the Tigers' first choice fly-half for the past four matches and has been selected ahead of Toulouse-bound Toby Flood.

"He's the only Welsh 10 playing in the Heineken quarters," Cockerill said.

"Owen's starting as our number one now and is keeping a player with 60 England caps [Flood] on the bench.

"You'd like to think he'd get an opportunity for Wales if he keeps playing like he is."

Neath-born Williams joined Leicester from Scarlets at the end of the 2012-13 season and has flourished at Welford Road.

"When we signed Owen we told him that if he's better than the blokes we've got, he'll play. And he's been better so he's played," Cockerill said.

"Ten per cent of picking him is because we're looking at the future, but we've also played better with him at 10. He's being picked on form.

"Owen is playing in a very good side and is playing at the top end of the game.

Williams has played for Wales at Under-20 level but has not yet made his debut for Warren Gatland's senior Wales side.