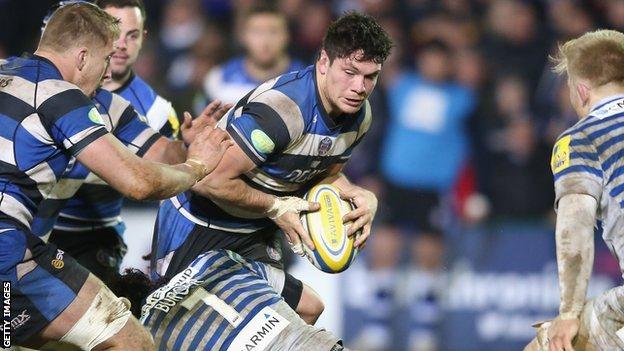 Bath are confident South Africa flanker Francois Louw will play a part in their Premiership play-off push despite a recent ankle injury.

Louw, 28, damaged his ligaments against London Irish on 22 March but the problem does not require surgery.

Bath head coach Mike Ford told BBC Points West: "He could have had to have an operation and be out for the season but luckily that's not the case.

"But we're not sure when he'll be back. It will be a few weeks."

With four games of the regular season remaining Bath occupy the fourth and final play-off spot in the Premiership.

Louw, who has 28 caps for the Springboks, signed a new long-term deal at the Rec last summer, having arrived in 2010.

The flanker missed the start of Bath's season as he was part of South Africa's Rugby Championship campaign from August to October, but made 15 appearances for the club this season before getting injured.

Bath have also been bolstered by the news fellow back-rower Alafoti Fa'osiliva will return from a knee injury before the end of the campaign.

And England centre Jonathan Joseph and hooker Rob Webber are both expected to be back in action before the end of the month following their respective leg and ankle problems.