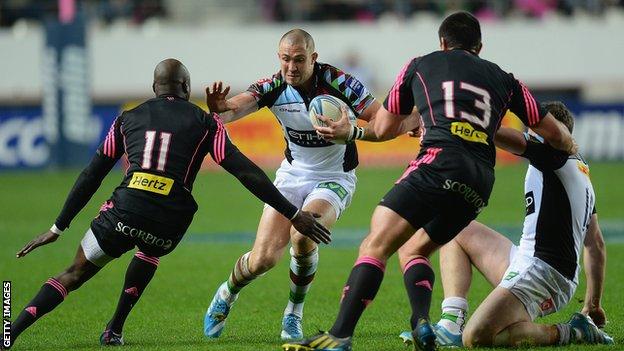 Harlequins are through to the last four of the Amlin Challenge Cup after winning 29-6 at Stade Francais.

Nick Evans kicked three penalties to give Quins a 9-6 half-time lead, with Morne Steyn replying with two penalties of his own for the French side.

Mike Brown's superb try extended the lead and Evans converted, the fly-half also landing a penalty and a drop goal, before Tim Molenaar crossed late on.

Quins will face Northampton, who beat Sale on Thursday, in the semi-finals.

They produced a determined display to repeat their 2011 final success over the French side in the same competition.

With Quins struggling to make the Premiership's top four and the Challenge Cup providing their best chance of a trophy this season, director of rugby Conor O'Shea selected a strong line-up.

England internationals Chris Robshaw, Mike Brown, Danny Care and Joe Marler - who made his 100th appearance for the club - were all included from the start against the team currently eighth in their domestic league.

Meaningful try-scoring opportunities were limited in the first half, with Steyn and Evans responsible for all of the points scored in the opening 40 minutes.

Full-back Brown, a star of England's Six Nations campaign, gave Quins the perfect start to the second period, jinking his way past a host of Stade Francais defenders before touching down at full stretch.

Evans converted and added another penalty from close range to take the advantage to 13 points, before the New Zealand-born fly-half made a crucial intervention to prevent the home team registering their first try.

With that chance gone, Harlequins comfortably held on for a spot in the last four and made the scoreline even more comprehensive when Evans kicked a drop goal from distance and centre Molenaar powerfully crossed in the corner.

"It was a real arm-wrestle of a game and no one would have expected the scores to be so close at half-time.

"Harlequins may not have known many of our players before the game but I think when they left at half-time, they knew plenty.

"We are pleased with the way our young players performed. It was a huge step up for them to play in that intensity of game but they will learn so much from that and I am happy for the future of the club."

"This is the end of the season and it's when things are won and lost so we're delighted with this win.

"It was a hugely satisfying performance. It was an incredibly physical game and intense as expected.

"We know they (Stade) had players missing but they also had plenty of good players on the pitch and coming to France is always hard, especially here.

finally told as we wore through the game.

"Now we have a great semi-final coming up. We've got the sniff of something and we will go for it.

"The semi-final is a long way off and it was nice just to get through a game without any injuries after so many blows. Hopefully we will see guys coming back soon."