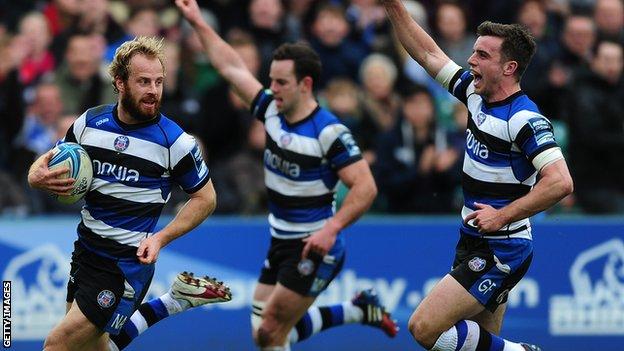 Bath made light work of an under-strength Brive side to reach the Amlin Challenge Cup semi-finals for the first time in six years.

Little changed after the break, with Micky Young going over and Agulla completing his hat-trick.

While Northampton Saints will face Harlequins, Bath will travel to Adams Park on 27 April take on London Wasps, who beat Gloucester.

The last time Bath reached the Amlin Challenge Cup semi-finals was in 2008. They beat Sale Sharks before going on to win the final against Worcester

The was the first time the teams had met since Bath edged a dramatic Heineken Cup final 19-18 in 1998, but this success for the West Country outfit came against a Brive side showing 14 changes to the line-up that beat Clermont Auvergne last week.

However, Mike Ford's side, without a win at home in three matches and fighting to stay in the Premiership's top four, made eight changes themselves and were ruthless in an open game, more so because of the French side's aptitude for giving the ball away.

Bath started with conviction and had their first score when Matt Garvey applied the final pass to a sweeping move, feeding Agulla to slam down.

George Ford, having already put a penalty well wide, was off target with a less than straightforward conversion, but finally found his range in front of the posts after a Brive misdemeanour.

Young's quick thinking with a tap penalty and offload to Abendanon had Bath two tries to the good, with Ford adding his first conversion.

And Gavin Henson then played his part as Bath ran in a pair of quickfire tries, with Rokoduguni benefitting from the bounce of a wayward Henson pass and charging to the line, before the Wales centre slipped in Agulla for a storming finish from halfway.

Ford's first-half struggles with the boot persisted as he missed both attempts from the tee, but the rout continued immediately after the break, with Young picking up from a short-range ruck and creeping over.

This time Ford kicked a simple conversion and he continued to influence the game in open play, producing a wonderfully timed pass to send Abendanon forward for a move that Agulla finished for his third try of the match.

Brive managed to retain their shape despite being outclassed and were rewarded when Murphy was driven over in the scrum, with Thomas Laranjeira adding the extras.

But they finished the game with 14 men following Hugues Briatte's sin-binning for a reckless challenge on Matt Banahan that left the centre with a bloody mouth.

"The game was won at half-time. The challenge for us was to be more ruthless in that second half, and we didn't quite achieve that.

"The positives are that we are in the semi-finals and a lot of players have got a lot of game time, which is good coming into the business end of the season.

"We will have a look at that last 20 or 30 minutes, where we lost momentum, I thought.

"The game got scrappy, but you have got to give credit to Brive. They never stopped competing.

"The sooner we can win silverware for this group of players, the better. It just gives them that belief to kick on to the next step."