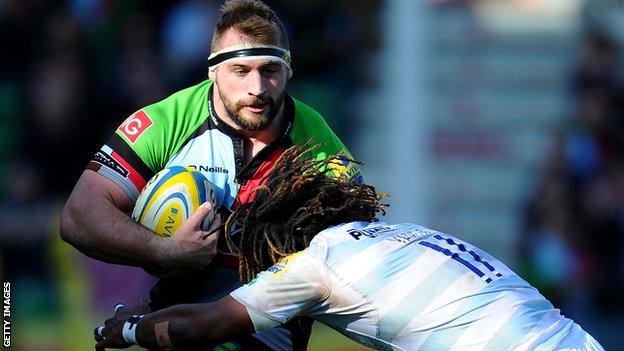 England international Joe Marler has extended his contract with Harlequins until the summer of 2016.

The 23-year-old prop, who has won 19 caps for the national team, came through the Quins academy and made his first-team debut in the 2009-10 season.

"Joe is developing into one of the leading loose-heads in international rugby," Quins boss Conor O'Shea said.

"Joe still has so much more to give and, like us all, is hungry for more silverware for both club and country."

When I was given the opportunity to re-sign for the club, there was never any doubt in my mind that this is where I wanted my long-term future to be

He added: "I am really excited, as I'm sure the Harlequins supporters will be, to see Joe's continuing development in the coming years in a quartered jersey."

Eastbourne-born Marler, who is 6ft (1.83m) tall and weighs in at 17st 4lb (110kg), joined the Quins academy in 2008 and subsequently had loan spells with National League sides Worthing and Esher.

He helped Quins win the Amlin Challenge Cup and Aviva Premiership in 2011 and 2012 respectively and is set to make his 100th appearance for the south west London side on Friday.

Marler has gained international honours for England at every age-grade level and made his full international debut against South Africa in 2012, before making four appearances at this year's Six Nations, missing the final match against Italy ahead of the birth of his first child.

He described himself as "really happy" to extend his deal at the Twickenham Stoop.

"There was never any doubt in my mind that this is where I wanted my long-term future to be," he said.