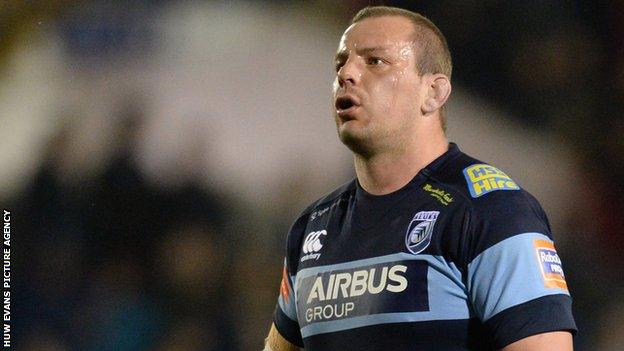 Cardiff Blues and former Wales captain Matthew Rees has admitted to having "dark days" after being diagnosed with testicular cancer.

Rees, 33, underwent successful treatment and after nearly six months out returned as a replacement in Blues' Pro12 win over Ulster last weekend.

He paid tribute to the medical staff at Velindre Hospital who helped him stay positive during his treatment.

"I've had some dark days but at the end of the day it's a challenge," he said.

"There were some days when I thought I'd maybe never play the game again.

"I've overcome that and obviously come out the other side and it's good to be back involved in the rugby side of it."

He was named Blues captain but in October 2013 the Tonyrefail-born player was diagnosed with testicular cancer.

"Velindre have been outstanding from day one. I was overwhelmed with how much support they gave me right through," Rees added.

"Speaking to the nurses in terms of success rates and where I was going and for me personally, it's just being positive all the way through.

"I'm glad to say I've come out the other side and obviously back on the field."

Rees continued to keep himself fit during his enforced absence and made his comeback as a replacement in the 28-23 Pro12 win over Ulster last Saturday.

"It was unknown territory for myself and probably the conditioning staff and physios here who didn't know how I was going to react," Rees said.

"I was lucky enough to keep on ticking over through the five months I was off and I kept myself in pretty good shape and worked hard after having the all-clear.

"It was great to get back involved in the matchday 23 and to play a part in a massive game for us.

"We've had some frustrating games up to date and it was nice to get the win against a quality Ulster side.

"To be part of the atmosphere was a good start to my comeback."