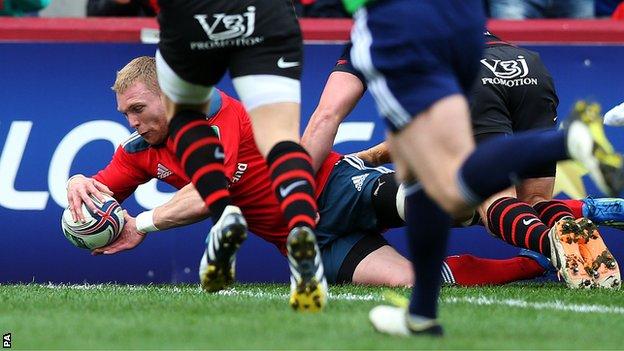 Keith Earls's try helped Munster into a 10-point lead before two Luke McAlister penalties made it 13-9 at the break.

Tries from Dave Kilcoyne and CJ Stander appeared to kill off the game, only for Hosea Gear to give Toulouse hope.

This match featured the two most experienced clubs in European history, and it had been expected to be tight.

Munster and Toulouse have played more Heineken Cup games than any other teams - 136 and 137 respectively going into Saturday's encounter.

And the duo have won the title six times between them (Toulouse on a record four occasions to Munster's two), while the Irish province were appearing in the last eight for a record 15th time.

Traditionally Munster have relied on the driving game of their forwards and although they have added another dimension to their attacking game out wide in the past couple of years, the driving mauls beloved of their pack were a major feature as they battered Toulouse into submission.

The hosts, roared on by the vast majority of the 26,200 crowd, started in typically ferocious fashion and took the lead after only five minutes.

A surging, multi-phase attack pummelled the visitors and when they went wide Zebo's excellent pass under pressure freed Earls and he scudded over in the corner.

Ian Keatley drilled over the conversion from out wide, but the hosts' delight soon had the edge taken off it as they infringed at the restart and McAlister put Toulouse on the board.

However, Munster were dominating territory and possession, stealing line-outs from the visitors, winning penalties at the scrum and turning them over at the breakdown, and two more Keatley penalties made it 13-3.

They looked in total control but within a few minutes they had lost captain Peter O'Mahony to a shoulder injury and seen their lead cut to four points at half-time as McAlister landed two penalties.

How the visitors were still within sight of the hosts was something of a mystery - although Toulouse had by now gained the upper hand in the scrum - and Munster came out of the blocks determined to put the game to bed.

They launched a couple of ferocious driving mauls and although scrum-half Conor Murray was twice held up inches short, prop Kilcoyne and back-rower Stander - the man of the match - were on hand to score from close range.

Keatley converted both scores and it looked as though the game was over, but although Toulouse are a pale imitation of their great teams of the past they are not four-time champions for nothing.

Replacement prop Jaba Bregvadze's excellent pass gave former All Black wing Gear the chance to score a marvellous try, with McAlister adding the extras, and for five minutes they were a side transformed and had Munster chasing shadows.

But the province from the south west of the Republic of Ireland rode out the storm and when their pack got the game by the scruff of the neck once more, the hosts pulled clear in style.

Laulala added a fourth try and although the giant Tekori hammered over for a second Toulouse effort, Zebo made a difficult finish look easy before local legend O'Connell added a rapturously received sixth as Munster wrote another glorious chapter in their epic European story.