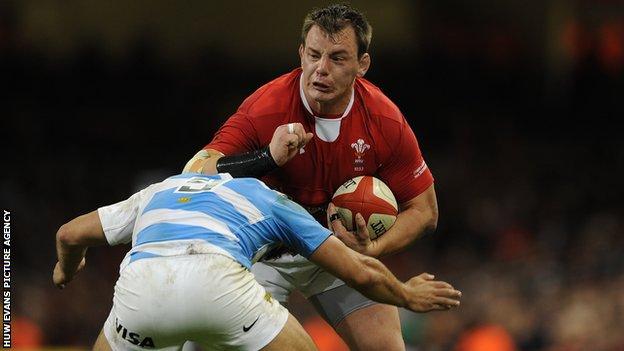 Cardiff Blues hooker Matthew Rees has not given up on his Wales career and has targeted a place in the 2015 World Cup squad.

"An end goal of mine is hopefully try and make that World Cup squad," he said.

Rees missed Wales' fourth-placed effort at the 2011 tournament in New Zealand because of a neck injury, but had been captain in the build-up.

The Tonyrefail-born player was a British and Irish Lion in 2009, but saw the captain's armband taken by current Blues colleague Sam Warburton.

Ospreys' Gloucester-bound Richard Hibbard has since emerged as Wales and Lions first-choice hooker with Ken Owens, of Scarlets, as back-up.

Having returned from an illness that put a temporary halt to his career in October 2013, Rees is now targeting a return to the international fold.

He feared the illness had put an end to his career.

But Rees takes heart from the continued presence of fellow 2009 Lions front-rowers Adam Jones and Gethin Jenkins in the national side's front row.

"That's down to me personally. It's [about] putting big performance back on the park and hopefully selection will look after itself then," Rees said.

"Obviously Gethin's got a great record with a 105 caps and Adam's not far behind.

"But for me personally it's just about getting back on the park and enjoying my rugby and then everything else will look after itself.

Rees joined Cardiff Blues from Welsh rivals Scarlets for the start of the current campaign.

He was named Blues captain and following successful treatment he returned to action last weekend off the bench in their shock 28-23 Pro12 win over Ulster.

Blues have yet to announce who will succeed former director of rugby Phil Davies in the long term with Paul John and Dale McIntosh currently in charge.

"It's been frustrating for me the first season at the Cardiff Blues, but that's life and you've just got to move on and learn from it," Rees said.

"I'm here next season and who knows? Obviously [a lot is] depending on who comes in and takes over as director of rugby.

"I'd definitely like to have the role next year, but that's out of my hands."