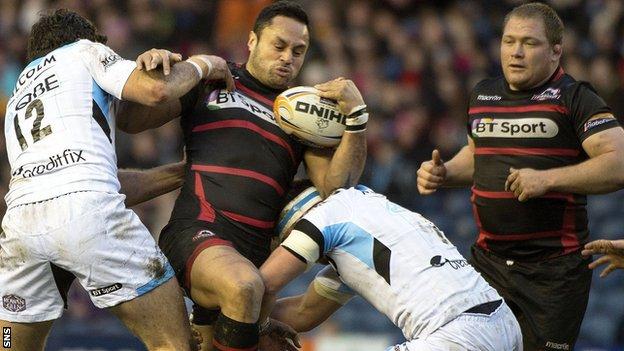 The second leg of the 1872 Cup between Glasgow Warriors and Edinburgh Rugby will be played on 26 April at Scotstoun.

The date was confirmed as Edinburgh's RaboDirect Pro12 run-in was revealed by the league.

Glasgow won the 1872 Cup first-leg 20-16 at Murrayfield thanks to a Stuart Hogg try.

Edinburgh will play their last home league game of the season against Munster at Meggetland on 3 May.

"The 1872 Cup match against Glasgow Warriors is a huge match for vital league points against our biggest rivals."

The original 1872 Cup second leg was scheduled for New Year's Day but was postponed due to a waterlogged pitch.

Warriors are hoping to beat their previous attendance record of 8,852 for a game in Glasgow when Edinburgh visit, having increased the capacity of Scotstoun to around 10,000.