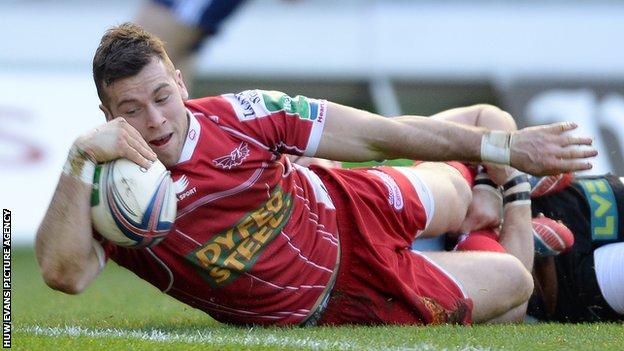 Davies, 23, is the leading try-scorer in the Pro12 this season with nine.

That has been enough to impress Sale Sharks scrum-half Peel, who won 76 Wales caps and toured New Zealand with the Lions in 2005.

"He's definitely the form scrum-half at the minute," said 32-year-old Peel. "I'm sure he'll get the nod."

"Rhys Webb would definitely have gone on tour, but it's given a chance now for someone else to come in and fill that role

He added: "He's scored more tries than anyone in the league. He's really developed his game over the last couple of years.

"His passing game has become really good - and his kicking and all-round game-management.

"He's very strong and physical, but what he can do is break particularly well... he's exceptionally fast."

Peel, who has agreed to join Bristol at the end of the season, thinks Davies, who signed a new contract at Parc-y-Scarlets in January, could be the ideal replacement for Rhys Webb.

The Ospreys scrum-half was injured in his region's 11-9 Pro12 defeat at Glasgow last Friday and is a doubt for the South Africa trip.

However, Davies must also challenge fellow Scarlets nine Rhodri Williams, who has made three Wales replacement appearances, the last as a try-scorer in last month's 51-3 Six Nations win against Scotland.

Webb had knee cartilage surgery on Wednesday and Peel has sympathy for the seven-times capped half-back.

"It's disappointing for Rhys obviously with the summer tour coming up," said former Scarlet Peel.

"He would definitely have gone on tour, but it's given a chance now for someone else to come in and fill that role."

Wales play the Springboks in two Test matches, in Durban on 14 June and Nelspruit on 21 June.

Gatland's side also have a warm-up match against Eastern Province Kings in Port Elizabeth on 10 June.