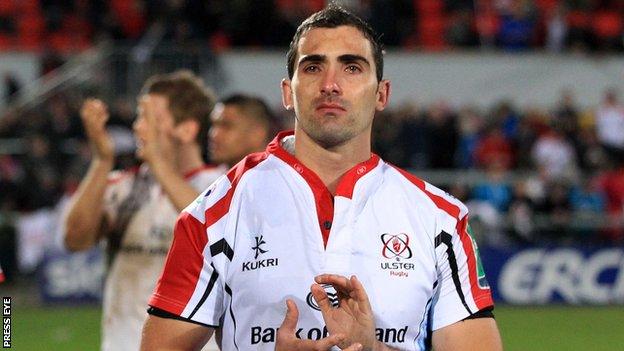 Ulster have been dealt a series of huge injury blows with Rory Best and Ruan Pienaar set to miss the rest of this season and Dan Tuohy and Roger Wilson also facing a number of weeks out.

Best will be out for six to eight weeks after sustaining an ankle injury in Saturday's European defeat by Saracens.

Pienaar will be absent for at least six weeks after suffering a recurrence of his shoulder injury in the same game.

Tuohy [hand] and Wilson [thumb] will be out until May because of fractures.

Full-back Jared Payne will face a disciplinary hearing later this week following his red card in the quarter-final defeat.

Lock Tuohy will undergo surgery later this week and there are hopes he could return to Pro12 duty before the end of this season.

Coach Mark Anscombe will also hope that back row player Wilson could be in contention for the final two regular-season games against Leinster [2 May] and Munster [10 May].

Ulster will then hope to be involved in the Pro12 play-off semi-finals two weeks later with the final scheduled for 31 May.

More immediately, Ulster will also be without influential players Andrew Trimble and John Afoa for this Friday's game against Connacht at Ravenhill.

Prop Afoa sustained a back disk injury in the heartbreaking Heineken Cup defeat while Trimble was concussed in Saturday's match and will follow the normal return to play protocols.

However, while Afoa, Trimble, Tuohy and Wilson will hope to be involved again before the end of this season, Best and Pienaar may have played their final games of the campaign.

An Ulster Rugby statement on Monday evening said that hooker Best would be out for "between six and eight weeks" with Pienaar missing for "at least six weeks".

The South African was struggling from early on in Saturday's game and eventually had to come off just after half-time.

Best went off early in the first half after suffering an ankle injury.