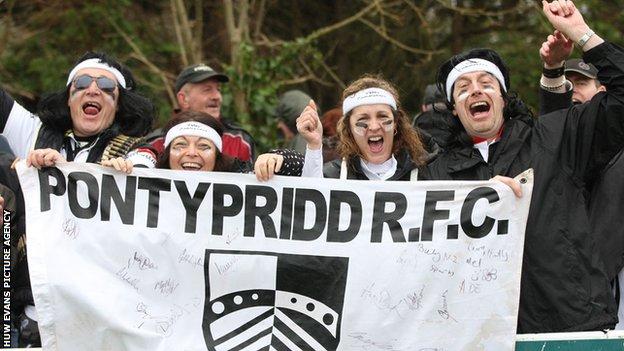 "They were just fantastic and worth a couple of points to us," said former Wales scrum-half John.

The victory means Pontypridd are still in the hunt for a Welsh Premier League, Welsh Cup and British and Irish treble.

Pontypridd will host Leinster A in the semi-final at Sardis Road at the end of the April, with the winners facing Bristol or Leeds Carnegie in the final.

"There's loads to play for," added John, who is also backs coach at Cardiff Blues.

"It's going to take a big effort from all the squad to continue battling on all fronts.

"Although it's fantastic for the club to still be involved in all three, we haven't won anything yet."

Ponty have a Principality Premiership match against Neath on Wednesday, 9 April and on Saturday, 12 April face Aberavon in the semi final of the Swalec Cup at Bridgend's Brewery Field.