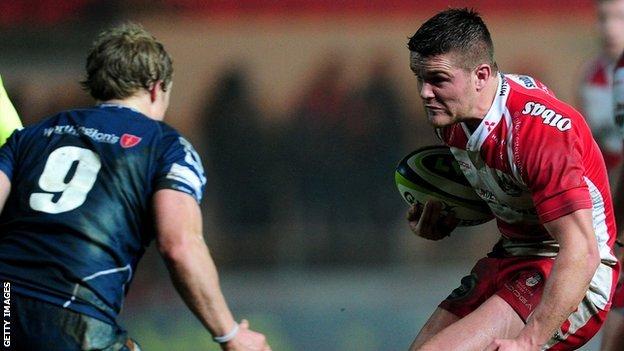 Knoyle, 23 and capped 11 times by Wales, says he had no choice but to leave the west Wales region for Gloucester at the end of the 2012-13 season.

He is now looking forward to linking up once more with Blues' former Scarlets skipper and hooker Matthew Rees.

In an interview with BBC Radio Wales, Knoyle did not go into specifics about the events that led to his departure from the Llanelli-based team.

Gloucester - to be fair, they took me in and I've tried, but I just haven't had the game time that I would have expected

But he denies having offended any of the Parc y Scarlets hierarchy during his four-season stint after joining them in 2009.

"I know what I was like. In terms of the people around me I'm a positive person - it [the situation at Scarlets] just hurt me," Knoyle said.

"It broke my heart, to be honest with you. But I've got over that and that's the way it is.

"But first and foremost I want to go to the Blues and try to put a marker down."

He added: "I don't think I let myself down in any way [at Scarlets]. I was good as gold. I was professional. I did everything I could.

"I just couldn't get my head around what was happening."

Knoyle won the last of his Wales caps on their June 2013 tour to Japan while many of his fellow countrymen were on British and Irish Lions duty in Australia.

He was a member of Wales' 2011 World Cup squad and had toured to New Zealand in 2010. He has also played for Wales Sevens.

The ex-Neath and Ospreys player believes joining Blues is a "step in the right direction" having not played as many Gloucester games under ex-Scarlets boss Nigel Davies as he hoped to.

"Gloucester - to be fair, they took me in and I've tried, but I just haven't had the game time that I would have expected.

"Moving away has been difficult for me in terms of my family and stuff. I miss them a lot.

"No-one knows what goes on behind closed doors, but in terms of going back to Wales and to the Blues, I think it's a step in the right direction for myself.

"I just want to push on. I don't want to be stagnant and… I know in my heart of hearts if I keep working hard, not only on the rugby field, just being professional as I can so when I'm called upon, then I can do a good job."

He is also relishing the chance to play alongside Rees, who has recently returned following successful testicular cancer treatment.

"It gave me goose pimples when I saw him run on the field because he's got so much to give and he's class," said Knoyle of 2009 Lions star Rees.