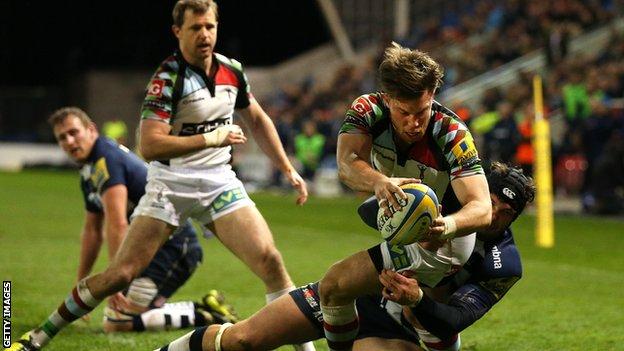 Harlequins are up to fifth in the Premiership, one point off a top-four spot, after an impressive 27-12 win at in-form Sale Sharks.

Tries from Nick Evans and Danny Care cancelled out Tom Brady's early score for the Sharks to give visitors Harlequins a 15-5 lead at half-time.

Sale were awarded a late penalty try but they drop to sixth, remaining four points behind fourth-placed Bath.

The hosts lost captain Dan Braid to a leg injury two hours before kick-off, while Harlequins were able to name the same team that beat Stade Francais in the Amlin Challenge Cup six days previously.

Conor O'Shea's side had the better of the first half, despite conceding the opening try after just six minutes.

Danny Cipriani, the Premiership's Player of the Month, exchanged passes with Sam Tuitupou, creating space for Tom Arscott to send winger Brady over in the corner.

Evans' superb solo effort was the perfect response for Quins, the Kiwi fly-half converting to put them in front before extending the lead with a penalty two minutes later.

England scrum-half Care dived over from close range, completing a move that started with a quick line-out inside their own 22, to give Quins a 10-point cushion at half-time.

They went further clear at the start of the second period when winger Smith, who will join Worcester Warriors at the end of the season, broke through two tackles to continue his impressive recent try-scoring form.

Sale's Brady thought he had reduced the deficit with his second try, but it was ruled out after television replays showed scrum-half Dwayne Peel had knocked on at a ruck.

This squad is incredibly tight and they love a challenge. We've given ourselves a mountain but we're going to fight every single step of the way

Quins earned a bonus point, which could prove crucial in the final run-in, with seven minutes to play.

Dave Ward's powerful run took Quins to within five yards of the Sale try line, and although the hosts turned the ball over, replacement Fa'asavalu recovered the situation and kicked ahead before touching down unchallenged.

The late sin-binning of lock Charlie Matthews for pulling down his man at a line-out, and a subsequent penalty try for illegally stopping a driving maul, did little to take the shine off a superb Harlequins victory.

"The decision not to award a try [Tom Brady's disallowed effort in the second half] was a dominant feature in the game. At 20-12 it could have been an exciting last 17 or 18 minutes, but those decisions are made.

"We accept it, but he was quick to the Television Match Official whereas he wasn't as quick on their two tries.

"But he's a world class referee isn't he? We know how good he is and he doesn't make many errors."

"Our squad have been incredible. We've had to fight tooth and nail because of what we've been through injury-wise and are still going through.

"This squad is incredibly tight and they love a challenge. We've given ourselves a mountain but we're going to fight every single step of the way.

"I just like it when we're mentally sharp, when we're going for it, taking quick line-outs and looking to challenge the opposition all the time.

"We've got one ferocious challenge coming down to the Stoop next week [against Leicester] but I think the crowd will know that we're back."