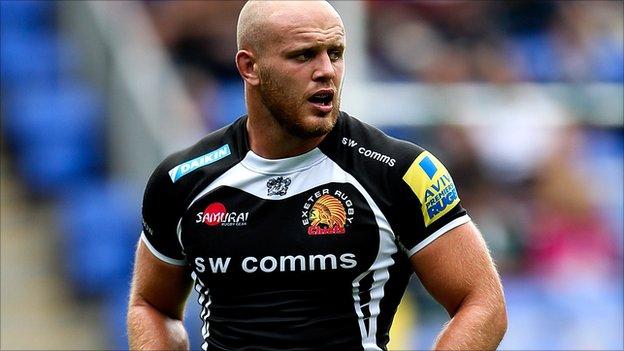 Worcester's Premiership survival hopes hang by a thread after going down to a home defeat by Exeter in a high-scoring classic at Sixways.

It looked grim when Exeter scored three of their five tries inside the opening half hour through Dave Lewis, Sam Hill and Gareth Steenson to lead 21-3.

But Worcester rallied valiantly to score four tries for the first time this season to claim a bonus point.

Worcester winger David Lemi - bound for Bristol at the end of the season - now has six Premiership tries this season, the Warriors' top scorer. Only three Premiership players have scored more.

That now puts Dean Ryan's side within seven points of 11th-placed Newcastle, who travel to London Irish on Sunday.

Exeter, whose other two tries came from hooker Jack Yeandle, climb two places to seventh in the Premiership table.

Needing victory to keep alive their slim hopes of escaping the drop - even coach Ryan had labelled it a 'must-win' - Worcester could not have imagined a worse start.

After scrum-half Lewis had made a solo break for the line, Steenson converting, Lamb cut the lead with his second penalty attempt.

But the Chiefs soon scored again when, following Fetu'u Vainikolo's charge, Steenson slipped in Hill at the left corner.

And, having converted a towering kick from the touchline, Steenson then wriggled his way through for try number three under the posts, adding the extras himself.

Chiefs stand-off Gareth Steenson's try, five conversions and a penalty gave him a 17-point individual haul on his recall.

At 21-3 down inside 24 minutes, the Warriors rallied through their perennial chief inspiration, full-back Pennell, who gave them hope before winger Lemi quickly added a second.

Lamb missed with the first kick, but landed the second to bring it back to 21-15.

But late pressure from Exeter brought the visitors their fourth try just before the break from hooker Yeandle, once again converted by Steenson for a 28-15 half-time lead.

Lamb's second successful penalty narrowed the gap again, only for Yeandle to cross for his second try, Steenson's boot taking the Chiefs out to 35-18.

But Creevy charged his way over on 53 minutes, Lamb converting.

Although Steenson landed a penalty, the Chiefs had replacement forward James Scaysbrook sinbinned. And, 17 minutes from time, Worcester cashed in when Lamb fed in Lemi wide out on the left.

Lamb missed the touchline conversion that would have brought back Worcester to within a converted score, the crowd's knowing groan indicating an understandable lack of faith that their team could score twice more in the closing stages.

After going close several times, let down by poor handling when it mattered most, Lamb at least kept his nerve with the Warriors' last penalty chance 90 seconds from the end - to eke out another point.

There was still late drama to come when, into time added on, Lamb's punt picked out the galloping Josh Drauniniu down the right. But, with space at his disposal, 40 metres from the try-line, the winger spilled it.

"We were too soft in the first half and not clinical enough. We dominated in the first 20 minutes, but gave them too much of a lead. You can't do that against a good side.

"We're as unified a group as you'll find in the Premiership. We've shown great heart, great work rate and a good understanding for the last three months, but we've got to get better if we're going to win games.

"We shouldn't be written off. We've got three matches left. We recognise that two of them are away against two of the best sides in the Premiership, but we're not going away yet."

"Five points in any Premiership game, especially away from home is fantastic. They tend to be tight games here. But, given the ball we had early on, and the lead we had, I'm disappointed that it was so tight.

"We want to fight for that sixth and seventh spot and this was a very important win for us as we haven't won many lately. And what a great end to the season it would be if we did make sixth.

"It wasn't an easy decision to leave Gareth Steenson out, but it was a relatively easy one to bring him back. He tends to have a good game here. He played well and gave us a lot of direction."