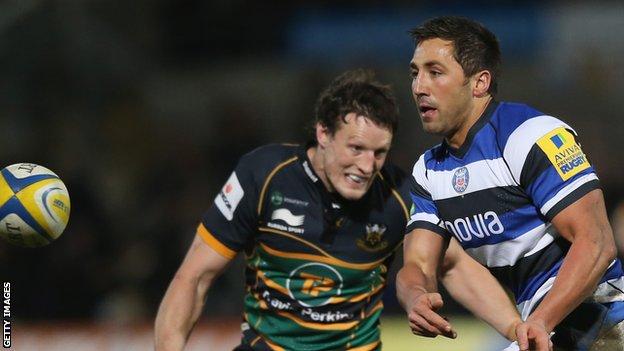 Gavin Henson will not be joining the Newport Gwent Dragons next season, according to the region's director of rugby Lyn Jones.

The Wales international, who is currently playing for Bath, had been linked with a move to Rodney Parade.

Henson's future at the English club has yet to be decided but his former boss Jones expects it to be sorted out soon.

The 32-year-old signed a one-year deal at The Rec last summer after joining from London Welsh, where he played under Jones.

It was the second time in his career that 33-capped Henson had worked with Jones, having previously combined at the Ospreys.

Henson has featured 20 times for Bath this season, including 12 Premiership games, and played a central role in Sunday's Amlin Challenge Cup 39-7 win over Brive, helping to set up two tries.

He has not spent more than one season at any club since leaving Ospreys in 2009, having a year out from the game before spells at Saracens, Toulon, Cardiff Blues and London Welsh.

Jones says Henson will be a good signing for whoever successfully secures his services.

"Gavin's a quality player. Always has been and always will be," said Jones. "I think it's only right that there's teams interested in him.

"He has got a huge amount to offer the game of rugby.

"Ian Gough is playing second row for us next year at 37, Nathan Hines is playing for Clermont at 37.

"Some people hit 31 and the game just disappears from them.

"But Gavin had [time off] and has matured."