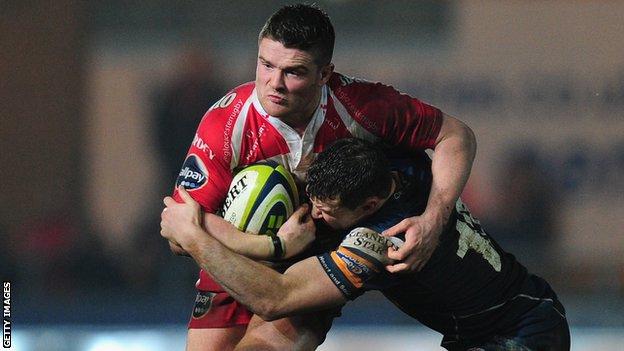 Scarlets head coach Simon Easterby has rejected claims that their former scrum-half Tavis Knoyle was treated badly by the region.

Knoyle says his departure from Scarlets for Gloucester last year had left him heartbroken.

But Easterby stands by the actions of the region in letting the 23-year-old, who will join Cardiff Blues this summer, leave Parc y Scarlets.

"I think for us it was the right decision," said Easterby.

Knoyle won the last of his 11 Wales caps on their June 2013 tour to Japan.

He was a member of Wales' 2011 World Cup squad, toured New Zealand in 2010 and also played for Wales Sevens.

The former Ospreys half-back says he has not appeared as much for Gloucester as he had hoped to and moving to the Blues will be a "step in the right direction".

Easterby says the Scarlets had too many scrum-halves in their squad and had to let Knoyle leave.

"It was a very difficult decision," he explained. "We had four really good young scrum-halves.

"Tavis was a little bit older and we had to make a call on one of them.

"Tavis was by far the highest paid of those scrum-halves and we felt he wasn't giving us what we needed when he had his opportunities.

"So probably a combination of things, but yeah definitely the fact that we had four good scrum-halves that we couldn't fit into the squad."