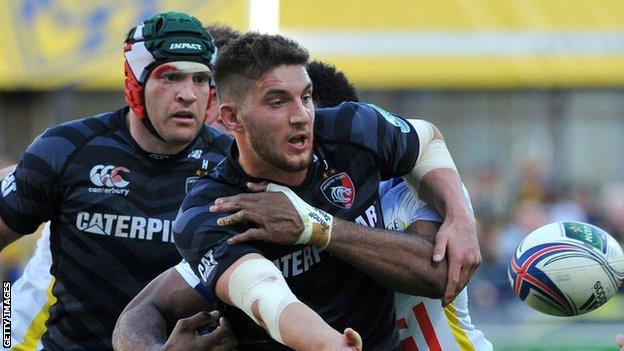 Leicester fly-half Owen Williams says he would love to tour South Africa this summer, but has not been contacted by the Wales management.

Wales play two Tests against the Springboks in June, with Williams admitting he is flattered to be linked.

"It's really nice to hear things like that but to be honest I don't want to get too far ahead of myself," he said.

"I'm just trying to take each week as it comes.

'We clearly wanted to keep him, but he felt with Rhys [Priestland] here and with us signing Steven Shingler and Aled Thomas that maybe he might get more opportunities with Leicester ... he probably felt that the pathway was a bit blocked here and with it being Leicester he felt that was an opportunity that he couldn't turn down.'

"Obviously it's every Welsh boy's dream to play for their country, but if the powers that be pick me for the summer tour I'll be over the moon.

"No one's got in touch with me at the moment, we'll see how it goes."

Having established himself as first choice fly-half, Williams scored 11 points as Leicester lost 16-22 to Clermont Auvergne in the Heineken Cup last Saturday.

He left Scarlets to join English Premiership giants Leicester last summer having first come to their attention in an LV= Cup match.

Scarlets coach Simon Easterby said at the time he was "disappointed" at the manner of Williams' departure.

"He probably felt that the pathway was a bit blocked here and with it being Leicester he felt that was an opportunity that he couldn't turn down," the former Ireland international said this week.

Williams confirmed the Welsh region had tried to retain his services.

"Scarlets approached me to stay but at the time Rhys [Priestland] was there and Rhys was first choice an playing for Wales," he added.

"Leicester's a massive club, they've got a big history and are always competing in the Heineken Cup quarters and competing for league titles.

"I just wanted a change in my life as well, to move away from home so it was the right move at the time for myself.

He has replaced Toulouse-bound Toby Flood as first choice number 10, but Williams says the club captain and England fly-half has been a great help to him.

"Lots of people said I was going to come here as third choice, personally I wanted to fight for second behind Toby Flood," Williams said.

"It was going to be tough to get ahead of him.

"But things have gone really well this year. [I've] have had a bit of luck come my way and hopefully it continues now.

"The last couple of weeks he's [Flood] been on the bench but he's still helping me, goes through my games with me now and again.

"He's a really nice bloke and tries to help all the time."