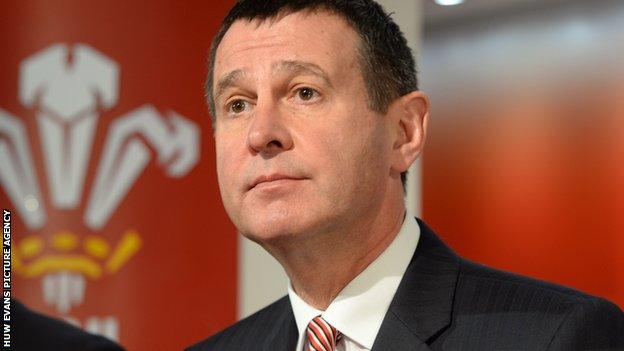 The Welsh Rugby Union has announced a multi-million pound boost in investment into both the community and professional game in Wales.

The increases, to £1.5m a year for the Premiership and to £2.6m for community rugby, will start on 1 July.

Talks with the regions on a new rugby services agreement continue, the WRU said.

"Our stated priorities are the wellbeing of elite and community rugby," WRU chief Roger Lewis said.

The approval of the increases follows the strategic plan set out by the WRU board earlier this year when funding levels for the entire game were discussed.

"I am particularly pleased that we are able to deliver these enhanced levels of direct funding during these challenging economic times for Wales," Lewis added.

"These increases are in line with the financial delivery expectations in our five year rolling financial and strategic plan which clearly indicates our future income levels and the associated costs.

"This investment will help us sustain and develop participation while continuing to deliver talent into the elite game through our pathway structures.

"Our focus is always to maximise our income in order to continue to fund the game at a realistic level in order to ensure rugby has a future as the national sport of Wales."

The four regions - Cardiff Blues, Newport Gwent Dragons, Ospreys and Scarlets - refused to renew the existing agreement with the WRU by the governing body's 31 December deadline.

The Welsh Rugby Union presented a new proposal called the rugby services agreement on 6 January and has been in negotiations with the regions.