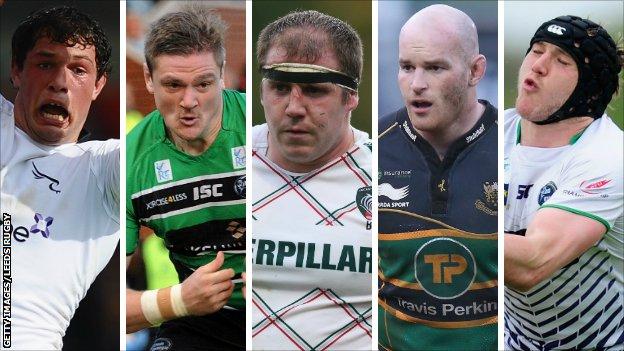 Newcastle Falcons director of rugby Dean Richards has said there is a "wealth of talent" in the Championship that could step up to the top flight.

Premiership rivals Exeter, Gloucester and Wasps have also raided the Championship for next season.

"You see players overlooked for one reason or another that come through later," Richards told BBC Newcastle.

If we stay up, and there's a strong chance we will stay up, then the experience the youngsters have had will be invaluable for next season

"There's a wealth of talent there."

Richards has put his faith in signing players from the lower tier throughout his career, with Dominic Barrow one of the Falcons' successes, while Northampton back-rower Sam Dickinson - who came from Rotherham and has been linked with an England call-up - is another example of the quality that exists within the Championship.

"When I was at Quins I brought in Chris Hala'ufia, Nick Easter came through and Danny Care arrived from Leeds, and a number of guys who had been overlooked by other people," Richards added.

"It's more difficult to find these days [players who can make the step up] but at the same time I still think there are quality players in the Championship who can adapt to Premiership rugby and even further.

Richards' preparations for next season have continued despite a degree of uncertainty surrounding their Premiership status, as Falcons and bottom side Worcester battle to beat the drop.

The Falcons missed an opportunity to ease tensions at the foot of the table when they were beaten by the Warriors in their last fixture, but the former Leicester and Harlequins boss remains calm going into the final four matches of the campaign.

"Pressure gets to everybody, but it's how you deal with it which is the big thing," Richards said.

"I'm quite relaxed in a lot of ways, I'd like us to have won a few more games than we have, but we have a lot of reasons as to why and why not.

"We've been hampered a lot by injuries, four people retired and injuries of eight-to-10 weeks or more - I've probably had more this season than I have in the whole of my career in various squads.

"The beauty of that is the youngsters have been given a chance and flourished. George McGuigan coming in at hooker has been outstanding and Scott Wilson on the tight-head side has had more game-time.

"If we stay up, and there's a strong chance we will stay up, then the experience the youngsters have had will be invaluable for next season."