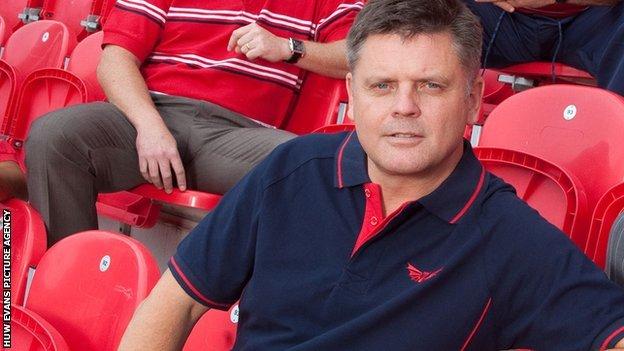 The head of the body which represents Wales' four rugby regions says they and the Welsh Rugby Union are "quite far apart" on the future of domestic game.

A new European tournament has been confirmed and was welcomed by the WRU and Regional Rugby Wales on Thursday.

But the two parties have to yet agree a domestic deal on funding and releasing Wales players for internationals.

"Our efforts will now be concentrated on working with the WRU to ensure ... a positive agreement," a statement said.

However, Mark Davies, the acting chief executive of RRW, told Radio Wales there was still ground to be made up.

Asked if he felt the regions and the union were still "some way apart" Davies replied: "I think that would be an accurate statement."

Asked how far, he added: "Quite far apart."

The four Welsh regions - Cardiff Blues, NG Dragons, Ospreys and Scarlets - operate and are financed under a contract with the WRU called the "participation agreement".

The current deal ends on 30 June, 2014, and talks on a replacement have so far stalled.

One of the major hurdles was the row over the future of European competition, and with that now settled the focus is expected to move to the domestic game.

"The first and foremost question is are we all committed to achieving competitive regional rugby in Wales," said Davies.

"If we are, then the rest works out from there.

"But what we need to do is establish the principles and fundamental elements that we're trying to achieve first, and that's not something that we've been able to achieve so far."

The regions feel that they are not given sufficient funds to compete with Irish Rugby Union-backed provincial sides in Ireland and the well-funded major English and French clubs.

In contrast to the relative success of the Wales national side, which has won the Six Nations title three times since 2008, no Welsh team has reached the final of the Heineken Cup since Cardiff RFC in 1997 - six years before the regions were created.

None of the Welsh teams reached the quarter finals of the tournament this season, and there are none currently in the top four in the Pro12 table.

The regions have also suffered the loss of a number of high-profile Wales international players who have made big-money moves to play in France or England.

These include British and Irish Lions Leigh Halfpenny (Blues to Toulon), Richard Hibbard (Ospreys to Gloucester) and Jonathan Davies (Scarlets to Clermont Auvergne) who all leave this summer.

Mark Davies contends that a new offer from the WRU - this time called the Rugby Services Agreement - does not offer any "new money" from the union.

He also claims that the deal is dependent on regions agreeing a form of central contracting for Wales international players.

"At the moment we have on the table exactly the same amount of money that we previously had, with the addition of an offer of £2m of new money from external sources basically which is aligned to some form of national or dual contract structure.

"We've made a number of proposals that we believe are coherent structures that make sense for both parties going forward.

"[They would] ensure that we have a successful national team - which is critical to all of us - and successful regions.

"We are yet to agree on those structures."

The Welsh Rugby Union have been asked for a comment.