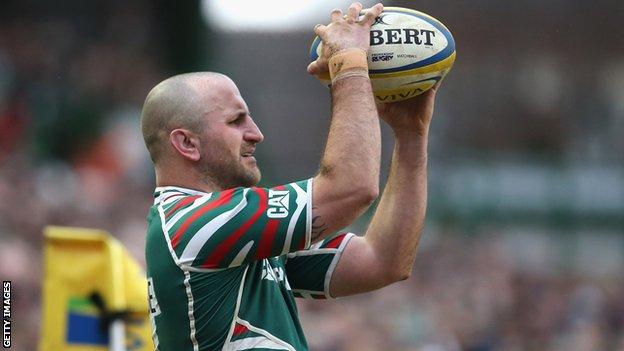 The ex-England international, 37, has played in 292 first-team games for Leicester, including seven Premiership and four Heineken Cup finals.

However, he has featured just four times as a substitute this term.

George Chuter, who started his career with Saracens in 1997, was the first player to make 250 Premiership appearances.

His record for Premiership appearances (262) was broken by Saracens lock Steve Borthwick on Saturday.

"To play nearly 300 games for Leicester and 100 for Saracens before that, plus 40 for England at various levels, gives me great pride," said Chuter.

"Now I can finally get a bit of perspective and think about how long I've played the game, how many matches and how many training sessions I've been involved in.

"The longest period of time I've been unable to play was three weeks when I had a knee cartilage trimmed after the 2007 World Cup."

Tigers director of rugby Richard Cockerill paid tribute to the veteran, having also played alongside Chuter when the hooker arrived at Welford Road from Saracens in 2000.

"George has been a great servant of the club, and of professional rugby, for a long time," Cockerill told the club website.

"He has played in some very successful teams and enjoyed many great days with this club. To play so many games at the top level of the club game, as well as internationally, and with the competition he has faced throughout his career, shows just how good a player he has been."