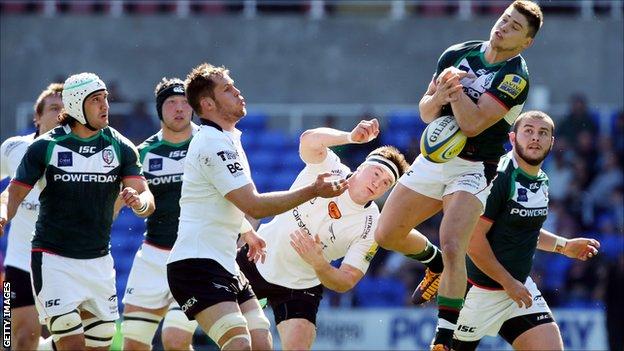 Director of rugby Dean Richards described the first half of as the "worst" he has experienced.

Falcons conceded all six tries in that half, and were 19-0 down inside the opening 15 minutes as Brian Smith's Exiles took control of the game.

"I've never seen anything like it," Richards told BBC Newcastle.

"It's the worst first half of rugby I've seen, probably ever, in terms of intensity, composure and everything."

Falcons battle at the bottom

Defeat keeps Falcons looking nervously at Worcester, who lie below them in the sole Premiership relegation place, after Dean Ryan's side picked up losing and four-try bonus points in their match with Exeter to trim the gap to seven points.

Title-hopefuls Saracens are up next at Kingston Park, who also want the points to help seal top spot but whose attentions might also be swayed by a Heineken Cup semi-final against Clermont the following weekend.

"It's going to be difficult," Richards added. It's how we enter into the game.

"There was a lack of focus and attention to detail, some of the boys think they're safe already but I don't think you can think that in any shape or form."