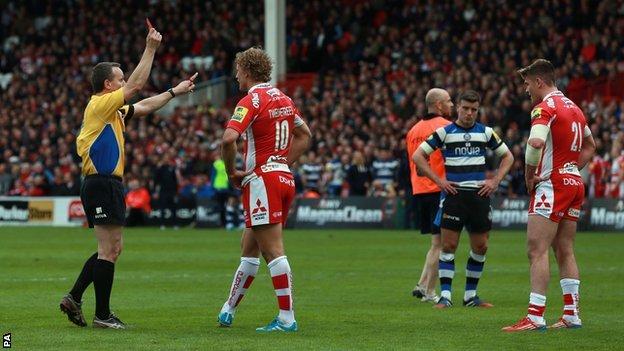 Gloucester pair Sila Puafisi and Tavis Knoyle will appear before a disciplinary hearing on Wednesday after being sent off against Bath.

Prop Puafisi is charged with a dangerous tackle on Bath's Nick Abendanon during Saturday's game.

Abendanon and Bath prop Paul James have both received "post-match citings" for striking Knoyle and a stamp on Shaun Knight respectively.

The citing is the equivalent of a yellow card and the Bath pair will not have to appear before the disciplinary panel for their offences.

Visiting duo Carl Fearns and Matt Garvey were sin-binned in the first half before Puafisi saw red after the break.

Cherry and Whites centre Mike Tindall and hooker Huia Edmonds then received consecutive yellow cards before Knoyle was sent off for his involved in a mass brawl, leaving Gloucester with only 11 men on the field.