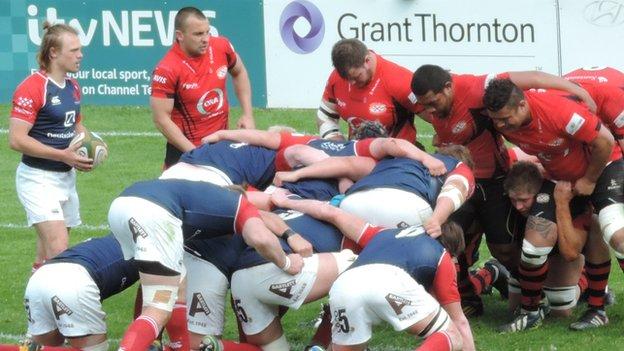 Jersey fell to the foot of the Championship table with just one match remaining after a 25-17 defeat to London Scottish.

One side, now either Jersey or Ealing, will be relegated to National One.

Jersey were earlier in the season and that could now prove costly.

They were in contention for much of the game against London Scottish but went behind when referee Darren Gamage awarded a penalty try after persistent infringements by the Jersey pack at the scrum.

The islanders hit back when scrum-half Nicky Griffiths collected a loose ball and flew over between the posts, to help make it 10-10 at the break.

The visitors came out brightly at the start of the second half and Tedd Stagg's try put them back ahead.

Winger Miles Mantella extended their lead further when he crossed the whitewash in the corner thanks to good work from full-back Jim Thompson, making his 50th appearance for the club.

Fly-half Aaron Penberthy had a chance to grab a consolation losing bonus point with the last kick of the match, but his penalty went wide.

Ealing will host play-off bound Rotherham Titans on the final weekend knowing survival is now in their hands, while Jersey are away at Bedford Blues.