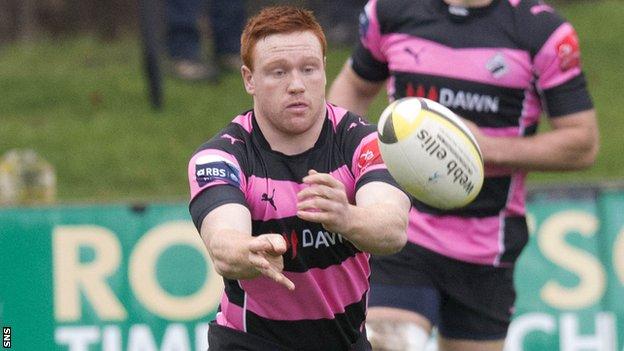 McConnell has been given a one-year deal, having been a development player with Glasgow before playing for Ayr in the RBS Premiership last year.

Now he is looking forward to returning to Scotstoun as a professional.

"I'm ambitious and I want to play at as high a level as possible. I'll get that opportunity at Scotstoun," he said.

"It's an exciting time to be re-joining the club."

McConnell was an elite development player with the Warriors between 2010 and 2013, made a couple of appearances in previous seasons and was on the bench against Connacht in February.

The former Scotland Under-20 international will vie with Niko Matawalu and Henry Pyrgos for a starting place at Scotstoun.

"Niko and Henry are two very good scrum-halves and I know I can learn a lot from them," he said.

Warriors head coach Gregor Townsend thought that McConnell's familiarity with the club set-up would help him challenge for a starting place.

"Murray has been training with us this season, so he'll fit straight in when he joins us on a full-time basis in the summer," he said.

"He's had a very good season with Ayr and we've been following his progress closely.

"He'll be an excellent addition to our squad."

Townsend stressed that it was also important to secure the services of Harley, who has made five appearances for Scotland, and South Africa-born Scotland A cap Holmes "as the back-row is a very competitive area for most teams".

"Rob is a very consistent player and is extremely hard working," he said. "He is developing his running game, his catch-pass skills and his line-out ability is also improving, so he's got a great future ahead of him.

"Tyrone has been great for us since joining in the summer. He's really given us competition at open-side and has pushed Chris Fusaro to playing at his best."

Holmes, who joined Glasgow on a one-year contract after leaving Italian club Petrarca, was delighted to secure a new deal as he turned 28.

"It was a great decision to come to Glasgow in the summer and I'm delighted to be staying for another two years," he said.

"My father was born in Peebles and he is so proud of what I've achieved in Scotland this season."

The 23-year-old Harley, who has made 93 appearances for Warriors since joining in 2010, added: "I feel like this is the perfect place for me to continue my development, working with a great group of players and coaches."