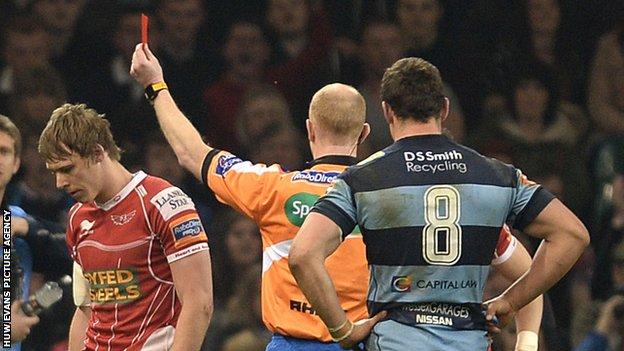 Cardiff Blues edged a fiery Welsh derby against the Scarlets in a Pro12 game that saw both sides finish with 14 men.

The first half of the Judgement Day all-Welsh double-header lived up to its billing, with Blues number eight Robin Copeland and Scarlets full-back Liam Williams both sent off.

Alex Cuthbert's try gave the Blues an early lead, with Rhys Priestland and Ken Owens crossing for the Scarlets.

Scarlets knew that a win on Sunday at the Millennium Stadium would almost certainly have sealed sixth place and a spot in next season's European Cup.

Blues are now just a place behind their rivals, although still nine points behind and unlikely to be able to overhaul them in their two remaining fixtures.

But under joint coaches Dale McIntosh and Paul John the Blues have rediscovered their hunger at the tail end of the season.

That was demonstrated as the home side, playing just across the road from their usual Arms Park home, ripped into the Scarlets from the start.

Blues spread the ball right and left before Cuthbert crashed over near the corner, although Gareth Davies missed the conversion.

When Cuthbert jumped to take a high ball soon after, Liam Williams took out his Wales team-mate in the air and the Scarlets full-back was perhaps lucky to escape with just a yellow card.

Davies kicked two penalties as the Blues took advantage of their man advantage for the next 10 minutes, the second set up by a big charge from Matthew Rees.

Wales and British and Irish Lions hooker Rees was making his first start since undergoing successful treatment for cancer, and was clearly relishing his personal battle with the Scarlets' current Wales squad member Owens.

The Blues pack had been further bolstered by the return of lock Bradley Davies, making his first start of 2014.

The Blues almost added a second try through Macauley Cook but the back-row was denied by a forward pass earlier in the move.

Nevertheless, by the time Williams returned to the Scarlets ranks the west Wales region were trailing 11-0.

Jordan Williams was unlucky not to reduce the deficit with the Scarlets' first chance of points, as his long-range penalty hit the right-hand post and bounced back into play.

The Scarlets claimed a try when George Earle charged down Dan Fish's kick and Jake Ball gathered to send Priestland over.

Despite going under the posts to make his conversion simple, the Wales fly-half somehow managed to shank his kick onto the post.

With Gareth Davies and Priestland exchanging penalties as the half ticked down, the Blues led 14-8 at half-time.

The Scarlets came out for the second half revitalised and after pinning the Blues into their own 22, only a forward pass from Jonathan Davies denied Kristian Phillips a try.

Priestland then missed a difficult penalty - nowhere near as embarrassing as his conversion blunder - as the Scarlets struggled to turn their pressure into points.

As the Blues broke the siege and surged upfield, Liam Williams and Robin Copeland clashed at a ruck in an incident that saw both men sent from the field.

Williams deliberately killed the ball, an act that saw him shown a second yellow and sent off, but Blues number eight Copeland had stamped on the full-back's head and was shown red.

Blues replacement Rhys Williams was perhaps also fortunate to escape any punishment for flooring Ball, although the Scarlets lock was grabbing hold of the front-row and referee Ian Davies waved play on.

With seven minutes remaining Scarlets attacked from a five-metre line-out and Owens capped a fine personal display with a try.

But crucially Steve Shingler, on for Priestland, missed the conversion from wide on the left and the Blues still led 14-13.

When Gethin Jenkins caught Josh Turnbull holding on in the tackle, that allowed Gareth Davies to kick his fourth penalty and leave Scarlets needing another try to win it.

The Scarlets hammered away, keeping the ball alive way beyond the 80 minutes, but had to settle for a losing bonus point.

They must now wait for their 2 May clash with another Welsh rival - Newport Gwent Dragons - to book their European place, while the Blues claim pride and bragging rights.