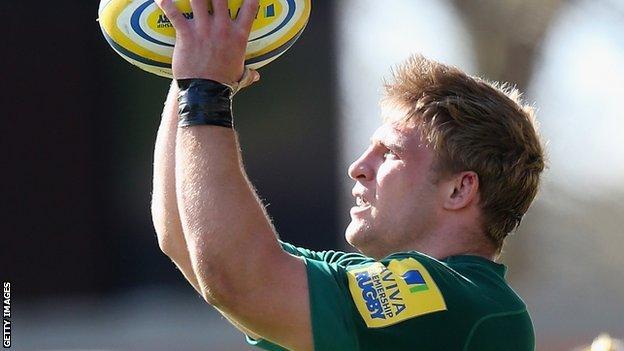 Youngs, 27, is one of a rare breed to have switched from centre to front row and is an England squad regular.

Veteran Chuter, 37, called time on his career on Monday as the first player to make 250 Premiership appearances.

"George helped me out the whole time, encouraged me and was fantastic," Youngs told BBC Radio Leicester.

"He's been a huge influence on my step up to hooker and he's an absolute legend of the game.

"I could always turn to him if things weren't going well in training with my throwing.

"He just gave me little pointers and was absolutely superb. He's always gone out of his way to help me and that shows what kind of guy he is."

Chuter made 292 first-team appearances at Leicester, during which time he figured in seven Premiership and four Heineken Cup finals and was rewarded a benefit year this season.

The Greenwich-born player also played more than 100 times for Saracens prior to his move to Welford Road and won 24 England caps in total, scoring one try.

Youngs added: "He has been an exceptional player and with 13 years at the club, what an achievement, he deserves everything he gets.

"If I can be like how he has been towards me when I was coming through, I would be delighted."

Victory over London Wasps last time out leaves Leicester third in the table with three games of the regular season to go.

Realistically, the Tigers need to win all three remaining matches to have any chance of snatching second spot from Northampton and guarantee them a home semi-final.

Friday's opponents Harlequins are also likely to need maximum points from their final three games if they want to secure a place in the play-off places.

It means plenty is riding on Good Friday's clash between the two sides at the Twickenham Stoop.

"With them beating us at our place just before Christmas, it makes it even more exciting," said Youngs.

"It's a big one and you want to go into the next two tough games [at Sale and at home to Saracens]."