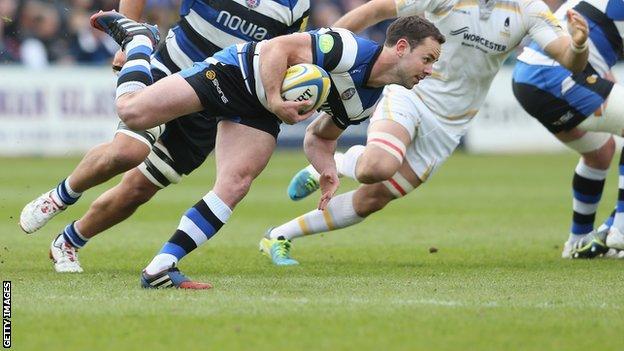 Bath boosted their Premiership play-off push with a hard-fought bonus-point win over bottom side Worcester.

Warriors took a surprise but deserved early lead when Josh Drauniniu touched down, but tries by Micky Young, Horacio Agulla and Nick Abendanon gave the hosts a 19-5 half-time advantage.

George Ford was sin-binned early in the second half as Bath suffered a wobble.

It was a relatively close escape for Mike Ford's side, who went into the match as heavy favourites but had to rely on Banahan's 79th-minute score to not only seal the win but also give them the bonus point which lifted them above Leicester in the table.

Worcester, meanwhile, remain bottom of the Premiership, seven points adrift of 11th-placed Newcastle with only two games to play.

Having started the livelier, Warriors went ahead when Drauniniu cut inside to touch down following a sweeping move from left to right, though Ryan Lamb's conversion was off target.

But Bath drew level midway through the first half, Young squeezing his way through after Ford's well-placed kick for touch had set up a maul from a line-out.

And, having converted, Ford then played an even bigger part in helping the hosts take control by brilliantly breaking through the Warriors backline and teeing up Agulla to score. The England fly-half's conversion was again successful.

In a start-stop opening period, the away side had Sam Betty sent to the sin bin for knocking Agulla in the air, and Bath made the most of their numerical advantage on the stroke of half-time when Abendanon found himself in space to cross the whitewash.

Ford's conversion, and penalty early in the second period, extended Bath's lead further and they looked on course for a relatively easy victory.

But the 21-year-old was yellow-carded for challenging Lemi in the air - the same offence Betty was penalised for in the first half - and Warriors instantly took advantage when Symons found a gap in the hosts' defence and crossed.

Pennell duly converted, and then reduced the arrears to seven with a well-placed penalty kick.

With Ford off the field, Gavin Henson kicked a penalty of his own before Pennell showed real persistence to force his way over in the corner for Worcester's third try and keep them within a score.

However, Banahan's try in the closing stages confirmed the result and earned Bath a potentially vital bonus point as they look to cement a spot in the top four.

Bath coach Toby Booth: "The important thing at this time of year - when you don't get any second chances - is that you find a way of winning.

"The good teams find a way and that's the encouraging thing. We found a way to get the extra point, which we believe may be significant in a couple of weeks' time.

"We're obviously pleased with the outcome, although there are many aspects of the performance that we are less than satisfied with.

"And you've got to give Worcester some credit, and after scoring 30-plus points at Exeter last week. They're playing for their lives and that brings special effort."

Worcester coach Dean Ryan: "Both yellow cards were a bit of a shambles. Neither were particularly dangerous in the way the lads came down.

"Let's just keep me away from that - and see what email we get next week.

"We are disappointed not to get something out of it. We thought we had a bit of momentum behind us, but couldn't quite nail it down.

"I feel for the players, because they are working so hard. We're not a bad side. We haven't got the power of a Bath or Saracens or Leicester - you can see that."