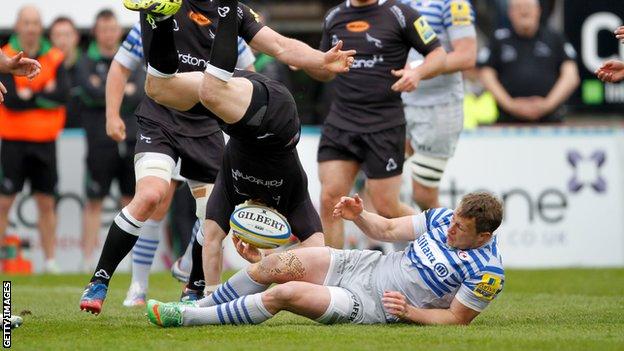 Saracens edged past Newcastle Falcons to cement their place at the top of the Premiership table.

A converted try from Tim Streather and a Charlie Hodgson penalty gave Sarries a 10-8 half-time lead, with Sinoti Sinoti crossing for the hosts early on.

Joel Hodgson added a second penalty after Charlie Hodgson had extended the visitors' lead with a kick of his own.

Ben Ransom's try for Saracens sealed the win, but Alex Tait's late score earned a bonus point for the home side.

There was still time for them to snatch an unlikely victory but Sarries had other ideas, running down the clock to keep them nine points clear at the summit.

The Falcons' losing bonus point means they are virtually safe from relegation, eight points clear of bottom side Worcester with two games to play, meaning the Warriors will be relegated if they fail to win their next match.

With a home tie in the play-offs already guaranteed, Saracens rested several big names ahead of next weekend's Heineken Cup semi-final with Clermont Auvergne, and did just enough to get past Newcastle without ever finding top gear.

Saracens have now won the last eight Premiership matches between the two sides.

Newcastle have to go back to February 2009 for their last win against Sarries, 13-9 at Kingston Park.

But when Samoa wing Sinoti powered over in the second minute, following a break from Alex Tait and neat hands from number eight Mark Wilson, it did not look like that would be the case.

Home fly-half Hodgson missed the conversion but things got better for the Falcons five minutes later when Sarries winger Jack Wilson was shown a yellow card for taking out Tait in the air.

Instead of hampering the visitors, the sin-binning seemed to spur them into action and they added 10 points in Wilson's absence.

A superb break from full-back Alex Goode put Newcastle on the back foot, before the ball was moved wide for centre Streather to stroll in for his first ever Premiership try.

Charlie Hodgson added the extras and extended the lead with a penalty shortly after.

Namesake Joel, kept the hosts in touch with a penalty from inside his own half as the visitors led 10-8 at the break.

The Hodgsons exchanged penalty kicks before Saracens kicked another and soon after replacement wing Ransom picked up a loose Newcastle pass and raced under the posts from 60 metres.

The game looked over as a contest, but Newcastle fought back as Tait squeezed over for a consolation score, which Godman converted.

"We have to go to Wasps and are at home to Exeter, and if we play like we did today then we should get something out of both those games.

"I could almost say I enjoyed the game, which was a quality match, but I never enjoy a loss.

"We showed a little bit of naivety and inexperience especially with their first try, but it was against a side who are at the top in terms of precision and accuracy when they do things.

"It's all good experience and hopefully we will be able to take that into next season - hopefully that will be in the Premiership."

"We took the opportunity to leave a lot of players at home with one eye on the Clermont semi-final, but it just shows the quality of our squad that we can do that and get a win - we're chuffed.

"It moves us up to 80 points and more or less guarantees us the top spot at the end of the season.

"The players front up and when you finish top of the table for two seasons running, it shows you're doing something right.

"And when you put yourself in enough semi-finals, you're going to win some of them and that's, hopefully, this year."